Mesut Ozil has said that he wants to win the Premier League and Champions League with Arsenal in a lengthy interview that gives the clearest indication of where his future lies.

Jump me to Ozil on… 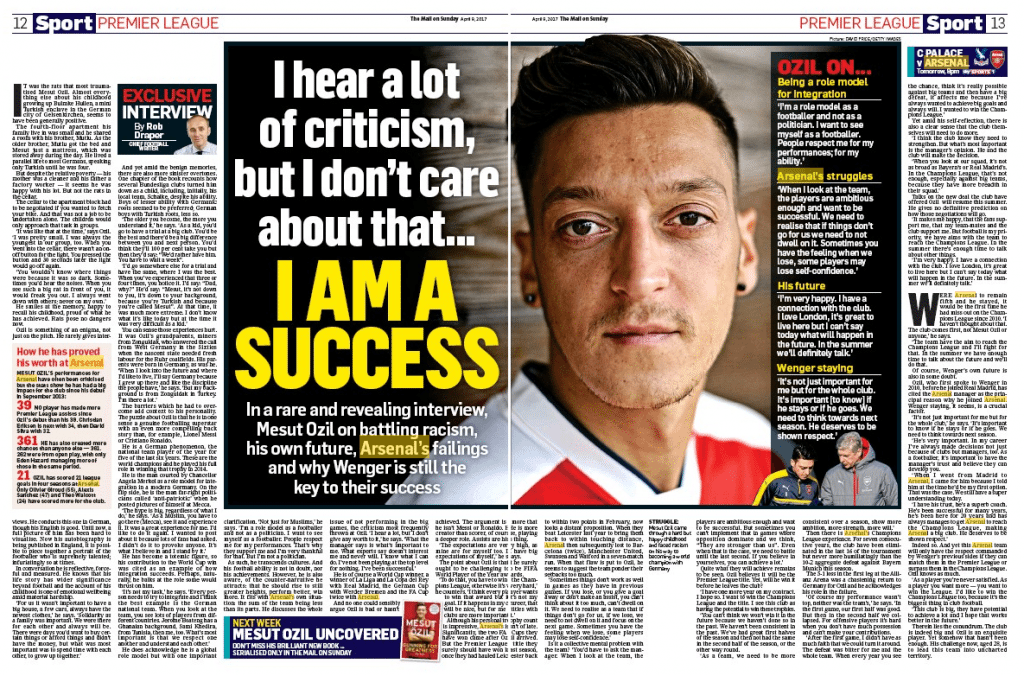 Mesut Ozil has given a lengthy in interview in today’s Mail on Sunday in which he talks about all the things you’d want him to talk about.

“I have one more year on my contract,” he told Rob Draper.

“I hope so [that I can win the Premier League]. I want to win the Champions League and the title. I see this club as having the potential to win these trophies.

“As a team, we need to be more consistent over a season, show more ambition, more strength, more will.”

So what of his future?

“It makes me happy, that the fans support me, that my team-mates and the club support me. But football is my priority, we have aims with the team to reach the Champions League. In the summer there’s enough time to talk about other things.

“I’m very happy. I have a connection with the club. I love London, it’s great to live here but I can’t say today what will happen in the future. In the summer we’ll definitely talk.”

And if Arsenal miss out on Champions League places by finishing fifth or lower?

“I haven’t thought about that. The club comes first, not Mesut Ozil or anyone,” he said.

“The team have the aim to reach the Champions League and I’ll fight for that. In the summer we have enough time to talk about the future and we’ll do that.

What about Arsene Wenger’s future?

“It’s not just important for me but for the whole club,” he said. “It’s important to know if he stays or if he goes. We need to think towards next season.

“He’s very important. In my career I’ve always made decisions not just because of clubs but managers, too. As a footballer, it’s important to have the manager’s trust and believe they can develop you.

“When I went from Madrid to Arsenal, I came for him because I told him at the time he’d be my first option. That was the case. We still have a super understanding today.

“I have his trust, he’s a superb coach. He’s been successful for many years, he’s been here for 20 years and has always manages to get Arsenal to reach the Champions League, making Arsenal a big club.

“He deserves to be shown respect.”