An Arsenal side inspired by Mesut Özil and captained by Theo Walcott and Aaron Ramsey got back to winning ways against West Ham, while also turning in a solid performance they can build upon moving towards Wembley.

Arsenal’s variant of the 4-2-3-1 in Wednesday night’s 3-0 win was closer to the one used in 2013/14 than the one used throughout the early stages of this season.

Rather than having Alexis Sanchez playing as a false nine, dropping deep, and Özil as a second striker running beyond him into the space vacated, the German played as an orthodox number 10, with Danny Welbeck selected to play a more orthodox centre forward role. Walcott was the principle line-breaking runner.

However, there was one crucial, but subtle, difference between the 2013/14 side and the one selected against West Ham.

In 2013/14, Giroud’s lack of pace meant that he himself could not stretch play or offer any threat in behind the opposition back line. Defences knew this and would look to squeeze higher up the pitch, knowing the Frenchman could not spin in behind and beat them in a footrace. Arsenal would instead play the ball in to Giroud for him to occupy a defender, before flicking it on for Walcott or Aaron Ramsey to run beyond the defensive line.

Against West Ham, the more nimble Welbeck was selected in Giroud’s place. West Ham had to respect Welbeck’s intelligence and pace and consequently defend deeper than they would had Giroud started. This opened up more space in the midfield area for Arsenal to circulate the ball. 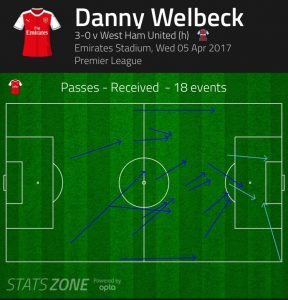 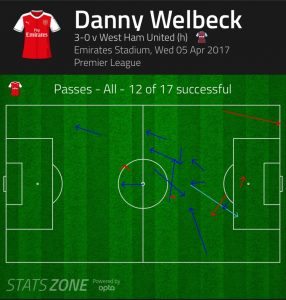 While Welbeck only received the ball 18 times and attempted 17 passes, his work without the ball in moving defenders and stretching the pitch facilitated the numbers enjoyed by the central midfield pair when they were circulating the ball. They would not have been able to do this with such consummate ease without his selfless work. 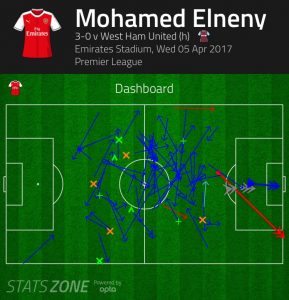 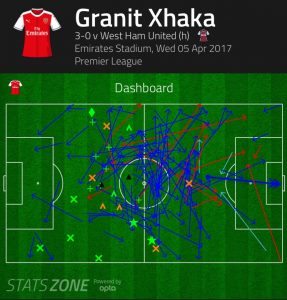 While Xhaka has endured deserved criticism for his discipline and decision making going in hard with avoidable tackles this season, his ball skills have remained unquestioned.

His performance against West Ham served as a reminder of why Arsene Wenger paid £35m for his skillset. He can still be moulded into an elite deep midfielder.

Mohamed Elneny provided the high energy tenacity that gets Francis Coquelin games, while also showing a touch of class and nuance on the ball that the Frenchman lacks. The Xhaka-Elneny axis had a balance to it that has been missing from other combinations used throughout the past two seasons.

Unlike against West Brom, where Arsenal appeared to be just circulating the ball for the sake of it in this space, they had Özil to call upon to provide the telling pass and look to find the forward players in dangerous areas. Most encouragingly for Arsenal, last night’s Özil looked like the 2013-2016 Özil of old, rather than the frustrated 2017 version, short of fitness, form, and confidence. However, form is temporary, class is permanent.

For Özil, the combination of having the off-the-ball work of Welbeck, a determined Walcott ahead of him, and the astute positioning and effective ball circulation of Xhaka and Elneny behind him, created the perfect environment in which he could thrive.

This is an environment that has seldom been provided for him since the first week of December.

While it’s a valid criticism that too many of this current Arsenal squad require the perfect set of circumstances in which to thrive, it’s just as valid to highlight how rarely certain players are afforded the right partners and right platforms.

With Welbeck selected up front, this meant Alexis would play from the left. Rather than being the team’s main provider of goals, he was cast in more of a supporting role, assuming some of the creative burden. After some consistently poor decision making in the first 15 minutes, the Chilean grew into the game and ultimately thrived in the role, playing a willing and able second fiddle to main man Özil.

It is a role that he is likely to reprise at Selhurst Park on Monday night when Arsenal visit Allardyce’s Crystal Palace.

Either Welbeck will continue up front presumably with an eye on keeping a settled team ahead of the FA Cup semi final against Manchester City in a couple of weeks, or Wenger will go horses for courses and select Giroud.