Over the past few days there have been reports that Jon Toral signed a new long-term deal with Arsenal but it seems there could be some confusion.

Despite the player himself saying in January, “I have another year left on my contract at Arsenal and I hope I can go back and make the step up to the first team,” these reports still say ‘it’s unclear how long this new deal is for’.

Did Arsenal register a deal for Jon Toral in January?

Yes, they did. But it doesn’t seem to be a new one, rather it looks like it was just him returning from his loan with Granada.

He was registered with Arsenal on 16 January, the same day as he was also registered as signing with an ‘unknown overseas club’ (Rangers). His comments above were made just four days before the contracts were registered with the FA – after he had agreed to join Rangers but before the paperwork was complete.

If you look back through the FA records, you can see that the same happened with Mathieu Debuchy in July. Nobody is suggesting he signed a new deal, but there he is, having a new contract registered. It freaked me out for a while until we asked around and realised it was him returning from loan:

That was after his return from loan in France.

The same happened with Wojciech Szczesny when he returned from Roma in the summer. He was re-registered with Arsenal on 5 July. His current deal still expires in 2018.

Another example of a player coming back from loan and being re-registered with Arsenal is Ryo Miyaichi in 2015 when he returned from FC Twente but before he was sold to FC Pauli. This was clearly not a new deal: 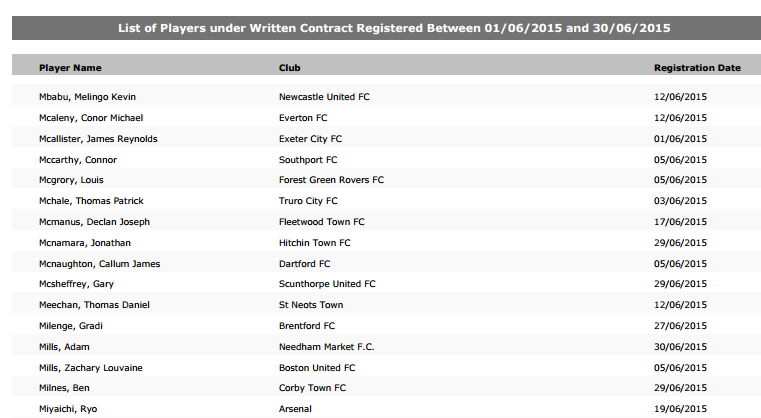 There are, of course, plenty of others, but you get the idea. When a player leaves on loan, Arsenal have to re-register them when they return. We will see another ‘deal’ registered for Toral in the summer when his Rangers loan ends.

Of course, Toral could have signed a new long-term deal in the four days between giving that interview about joining Rangers and Arsenal registering the move with the FA, but that seems unlikely.