Should Arsene Wenger stay at Arsenal, L’Equipe think that he could well make major changes to the coaching staff at the club.

With Arsene Wenger admitting that he has finally made a decision about his future, many believe that he has decided to quit. This is not an unsurprising conclusion to draw, especially given the fact he said it after another horror show.

But on Sunday morning there were reports that Wenger will sign a one-year deal at Arsenal – a compromise it’s being called – instead of the two-year contract that has been on offer for some time.

In an article about Wenger’s post-West Brom statement, L’Equipe close their piece by saying [via Google translate]:

“Clarifying one’s future can be a lever, both vis-a-vis the outside and the inside. If he decides to stay, which remains the most predicted option, he could accompany his decision with strong announcements on the new composition of his staff. Not easy to calm a pressure from the sky.” 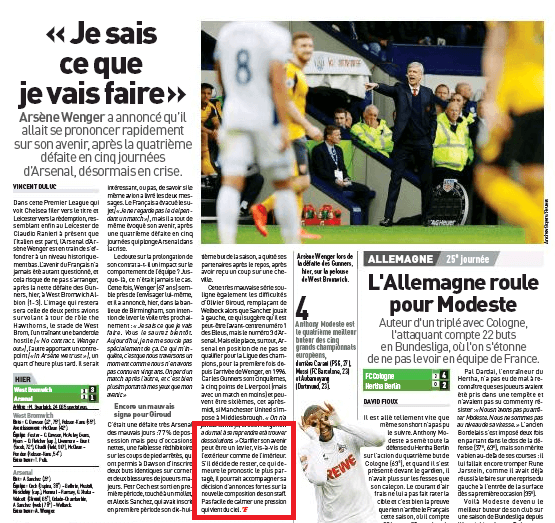 Although Google has done its thing, you get the jist of what was said. We had a proper Frenchie translate the important part – “If he decides to stay, which seems to be the most predicted option, he could announce strong decisions on a new coaching staff.”

Would that mean a new assistant and an end to Steve Bould? Would the person brought in be groomed for the hotseat at the end of any new Wenger contract? Why are they saying this? They aren’t known for wild speculation, have they heard something?

With every passing day, all we get are more and more questions.

1 year left: Arsenal not in extension talks with Mohamed Elneny

Arsenal set valuation for Bernd Leno as they consider sale