The Sunday Express are today running an EXCLUSIVE claiming that Max Allegri has verbally agreed to take over from Arsene Wenger should the Frenchman leave at the end of the season.

But there are a few problems with their story.

Firstly, it’s the Express. Their exclusives around transfer rumours tend to be unreliable, to put it kindly. They once ran a massive back page splash exclusive claiming Cesc Fabregas had agreed to go to Manchester United – and that wasn’t even the summer he moved to Chelsea.

Secondly, it’s been given a tiny part of their back page. Now, I know that the story might have come in late, after their page was laid out, but wouldn’t you think a story like this would invite a rethink? It’s pretty big, if true. 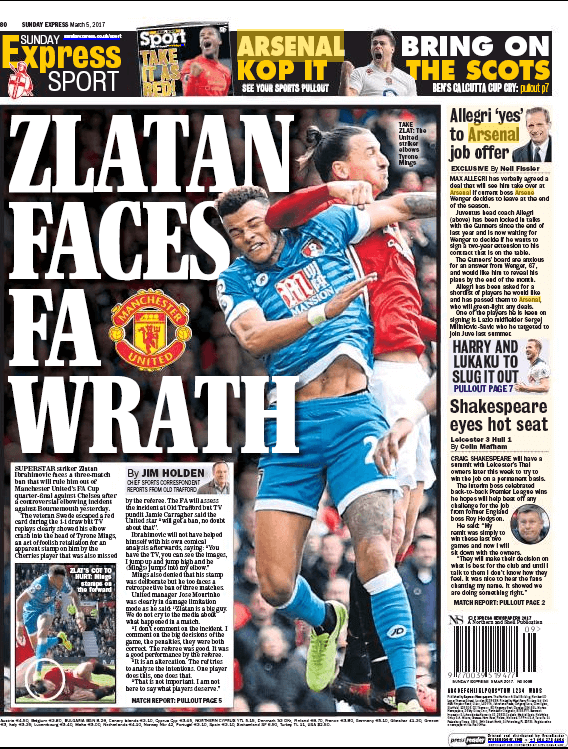 Thirdly, Neil Fissler offers no details about why we should believe his story. There is no indication where the information came from or why he deems it reliable. Not even an ‘unnamed source’ from either party involved. These days, ‘showing your working out’ has become imperative if you want someone to believe you, especially if you haven’t built up a reputation as being reliable beforehand.

Finally, the whole thing is based on a lot of ‘ifs,’ ‘maybes,’ and ‘verbals’ that cannot be proven as there is no paper trail. It also smells a lot like the story that was doing the rounds earlier in the week in which Allegri was supposed to have confided in friends, over dinner, that he would replace Wenger. This story was denied by a journalist in Italy who claims that the Italian has not been talking about moving to Arsenal and it’s all just media speculation

I do think there is genuine interest from Arsenal in Allegri and I’d be confident that Allegri is interested as well. I base that on nothing other than having been neck-deep in the rumours for the past few months. There is far too much smoke for there not to be a tiny flame somewhere. [cont below]

The Express also claim that the Arsenal board would like an answer from Wenger this month and that Allegri would try to bring Lazio’s midfielder, Sergej Milinkovic-Savic whom he tried to sign in the summer for Juventus. He’s double-barrelled, so should fit right in at Arsenal, if that is the case.