The Daily Star appear to have followed in the S*n’s footsteps this morning (Wednesday) and fabricated a sensational headline with no real information behind their claim.

The Star are reporting the Chelsea are preparing to sell Michy Batshuayi, who they bought for £33m from Marseille in the summer, in favour of bringing in Alexis Sanchez, who has under 18 months left on his current Arsenal deal. 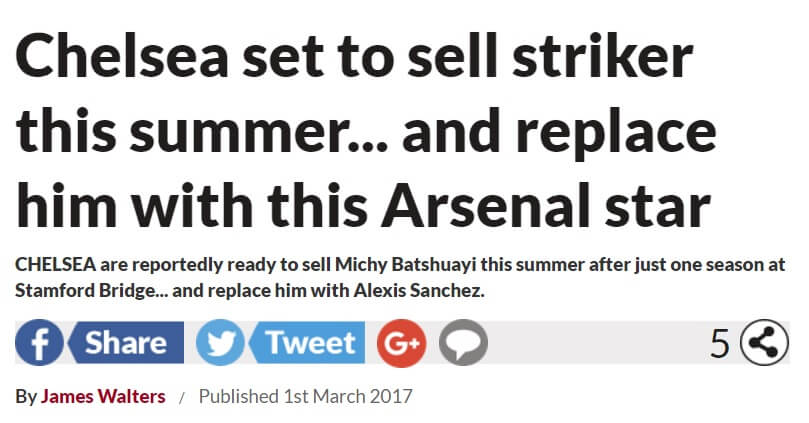 The outlet cites the Daily Mirror as their source for the story that Batshuayi is leaving the Blues. However, their claim that they’re monitoring Alexis’ ‘situation’ at Arsenal is completely out of nowhere with nothing to back it up.

In fact, just yesterday, the Star claimed that the Chilean wanted to return to Spain and could move to Sevilla despite this making absolutely no sense whatsoever. The writer of this latest piece – James Walters – even references the aforementioned piece claiming that Alexis wants to move to Spain. So, which is it: Chelsea or Spain?

Right now, there is no proof that Alexis actually wants to leave Arsenal. In fact, he’s claimed he’s happy and it appears the contract details are just being hashed out. And we almost certainly wouldn’t sell him to Chelsea of all clubs!

Despite Arteta stance, Arsenal man in negotiations with Schalke about permanent move