Arsenal are said to be preparing for life after Alexis this summer with scouts instructed to find a player to replace him according to an exclusive by Sam Mokbel in the Daily Mail today.

While it’s easy to dismiss many stories and rumours in the press, the ones surrounding Alexis have been relentless. Add to that Mokbel’s track record of not really being a gossip-monger and it does indeed feel as if the Chilean is on his way. 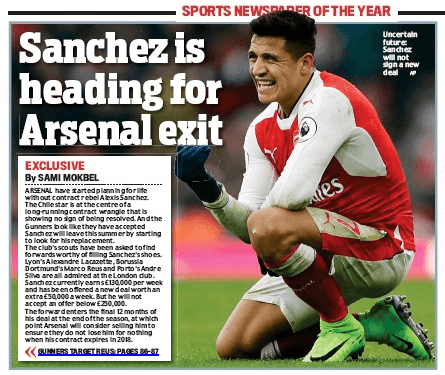 Arsenal, Mokbel tells us, have offered Alexis another £50,000 A WEEK to remain at the club. That would take his salary to £180,000 per week but he wants £250,000. This has been a consistent figure and the silence from the Alexis’ camp throughout this whole thing has been deafening.

Mokbel claims that Arsenal have been looking at Alexandre Lacazette, Marco Reus and Andre Silva (Porto) as a replacement ‘worthy of filling Sanchez’s shoes.’ But he makes no mention or Torino’s Andrea Belotti whom Arsenal have been scouting for a while now and could be an excellent replacement.

Arsene Wenger previously said that he would hold both Alexis and Mesut Ozil to their contracts, but it’s hard to see the club willing to throw away tens of millions by keeping the players for another year and then letting them leave in for free the next year.

Mokbel also writes that Ozil too is refusing to sign.

The German’s future would seem far more inextricably linked with Wenger’s than any other player at the club. A sensitive soul, who revealed bust-ups with both Jose Mourinho and Pep Guardiola because they didn’t seem to be tender enough with him.

Ozil has always made a massive deal about how important Wenger is to him.

Gonna be a fun summer, eh?

Arsenal to ask £40m for Maitland-Niles and Nketiah

Matt Macey after leaving Arsenal – How is it going?