Arsene Wenger did not seem to take too kindly to being told Alexis Sanchez should be spared some post-match criticism.

Don’t miss – Wenger on Alexis’ future and his own

With fans and pundits saying that the Chilean ‘deserved better’ many seem to be blind to his shortcomings. While there is no doubt he is an amazing player, he can also be a liability. He is selfish and his huffing and puffing when things don’t go his way are childish.

Asked about his forward, and if he should be separated out when criticising the team post-Munich, Wenger was quite clear.

“Watch the game again,” Wenger said. “I do not want to comment individually but we have lost as a team and Alexis is a part of that”

Speaking this week, Mesut Ozil’s agent hit out at how his client was being scapegoated for Arsenal, and he has a point. The German’s style is a complete contrast to the Chilean’s, but that doesn’t make the latter better. In fact, Ozil is the very definition of a team player while Sanchez is an individualist.

“He is not someone who runs around aimlessly and tackles just so everyone thinks he is fighting,” Dr Erkut Sogut, Ozil’s agent said. “If it doesn’t make sense to run somewhere he will keep that power for the next run.”

It’s hard to read his comments and not think it is a dig at Alexis and how he is treated by fans and the media in comparison to Ozil.

Against the Germans, Ozil and Sanchez had the same number of shots (and shots on target) – 2. Ozil’s pass percentage was better, and put in five tackles to Alexis’ zero. The only metrics of note from that game, in which Sanchez did better were ‘key passes’ – 2 to Ozil’s 1, total passes (by 2) and long balls (3 v 1).  And, of course, the goal – after he missed another penalty.

Those stats are far too close to be able to say one player was a disgrace and hid while the other shone and tried to do it all himself. The main difference? Body language. And media narratives, of course.

In fact, if you look at the pair in the Champions League as a whole this season, they are practically inseparable: 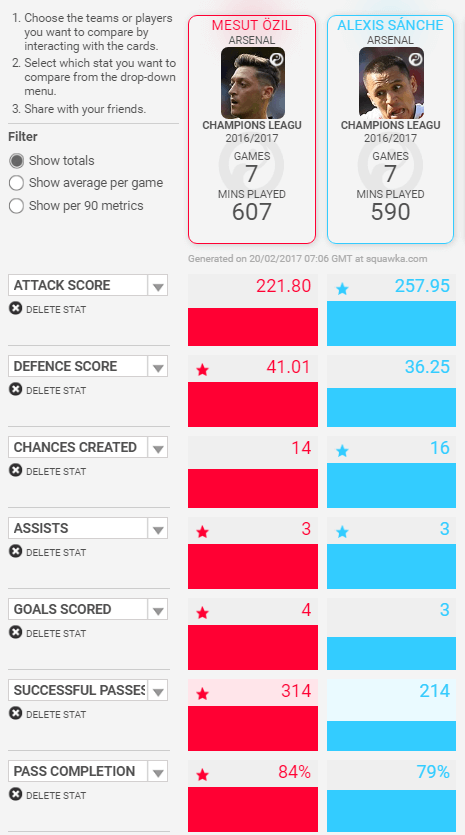 It’s almost as if many in the media feel that running around lots is the only metric that matters.

Wenger also denied that the defeat in Germany would make it less likely that Alexis would sign a new contract with the club, before adding his own future depended on results over the rest of the season.  When asked what the players could do to help him decide to sign a new deal, Wenger replied, “That will not depend on the players, it will depend on the results.”