Arsenal were found wanting yet again at Stamford Bridge on Saturday in a defeat that finally ended a title challenge that had been running on fumes.

Rather than analysing Arsenal’s mistakes for the three goals Chelsea scored on Saturday, more can be learned from tackling the underlying causes of why Chelsea were able to build pressure and force the errors that led to them in the first place.

Arsenal went into Saturday’s match against the league leaders with only one recognised central midfielder available for selection. They’d known this would be the case since Aaron Ramsey pulled up against Watford on Tuesday. Arsene Wenger had time to try to build something in training to take on a Chelsea side very different to the one who had been dispatched 3-0 at the Emirates in September.

Given the depleted personnel, Wenger selected the same front 4 that had pressed a very different Chelsea into oblivion, presumably looking to come out swinging and try the same again, albeit with a different midfield base.

However, this wasn’t to be the case and Arsenal instead lined up in more of a 4-3-3 shape, with Mesut Özil playing from the left and both Alex Iwobi and Alex Oxlade-Chamberlain ahead of Francis Coquelin in central midfield.

The thinking behind this, much like Chelsea’s shift to a back three ahead of their Autumn resurgence, was to opt for strength in numbers and attempt to construct a unit that compensated for one another’s individual shortcomings and outnumbered the equivalent opposition unit.

In this configuration, even more importance is placed on the man at the base of the midfield. In fact, he’s likely the most important player on the pitch and him doing his job well is integral to the success or failure of the team. He has to be more than merely a mop or a windscreen wiper dealing with opposition attacks. When his team have the ball, he has to always make himself available to receive a pass from the goalkeeper or back four. Moreover, he should also offer a relief option for the more advanced central midfielders in the event of them being pressed.

Even Coquelin’s biggest fans will concede that he’s no Busquets or Alonso. He’s not even a Carrick or an Arteta. And nobody expects him to be.

Most will agree that initiating the build-up, controlling the tempo of a team’s passing play, knowing when to slow it down and when to inject impetus, are things that are quite frankly beyond Coquelin’s skillset. There’s very little to be gained from continually criticising his lack of guile on the ball. It’s been apparent throughout his time at the club.

But it wasn’t his lack of guile on the ball that was Arsenal’s biggest inhibiting factor against Chelsea, rather his poor play without the ball.

Individual errors, even if it’s 3 of them leading to opposition goals in 3 consecutive league games, or 3 in the space of 5 seconds as was the case in the lead-up to Eden Hazard’s goal, are often flagged up and discussed. However, certain other mistakes that go unnoticed by many can sometimes be fundamentally more damaging to a team.

It doesn’t take as much guile, skill, or initiative for a midfielder at any level to make themselves available to receive a simple ball from their defence in order to progress play and bridge the gap between defence and attack and get the ball to the more creative players further up the pitch.

Coquelin didn’t do that against Chelsea. He didn’t offer his defence an easy ball, and as such, they were forced to explore increasingly elaborate and risky options. This not only made it difficult for Arsenal to build momentum, but the frequent quick concession of possession didn’t afford the defence much of a respite between the waves of Chelsea attacks. 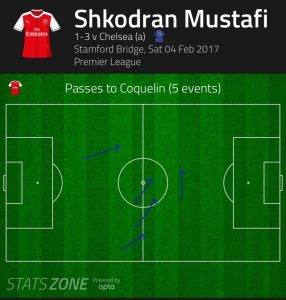 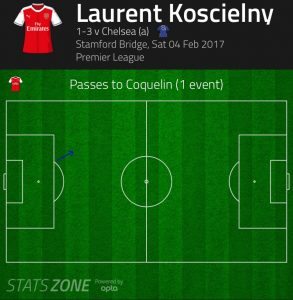 Arsenal’s deepest midfielder received the ball 5 times from Mustafi and just once from Koscielny. This simply isn’t conducive to building any momentum or alleviating pressure whatsoever and creates a massive problem.

When you’re watching teams that aren’t Arsenal, think about how many times a match you see a central midfielder drop deeper to form a triangle with his centre backs to help them progress play. Coquelin didn’t even give his defenders the option to do that.

As a result of this, they were forced into attempting increasingly speculative risky passes 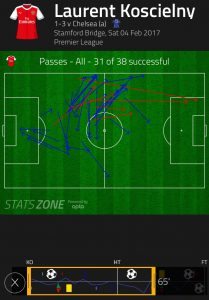 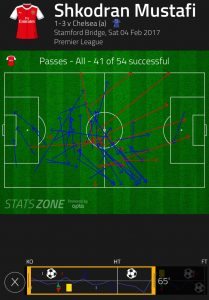 Not having the option of an easy pass ahead of them piled additional pressure on the centre backs in a match where they were already up against it. Being forced into attempting speculative passes resulted in Arsenal turning the ball over a lot and inviting more waves of Chelsea attacks.

Having a midfielder offer a short option can be the biggest lifeline for a back four trying to play out. 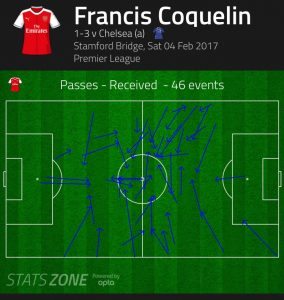 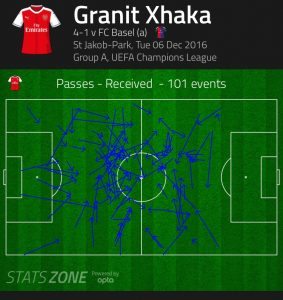 The first pass out of defence is absolutely crucial at the highest level. Compare the positions Coquelin received the ball in on Saturday to the positions Granit Xhaka received it in against Basel. You can’t receive the ball if you don’t show for it.

Coquelin not offering a central option was compounded by the atechnical Gabriel coming on in place of the concussed Hector Bellerin. 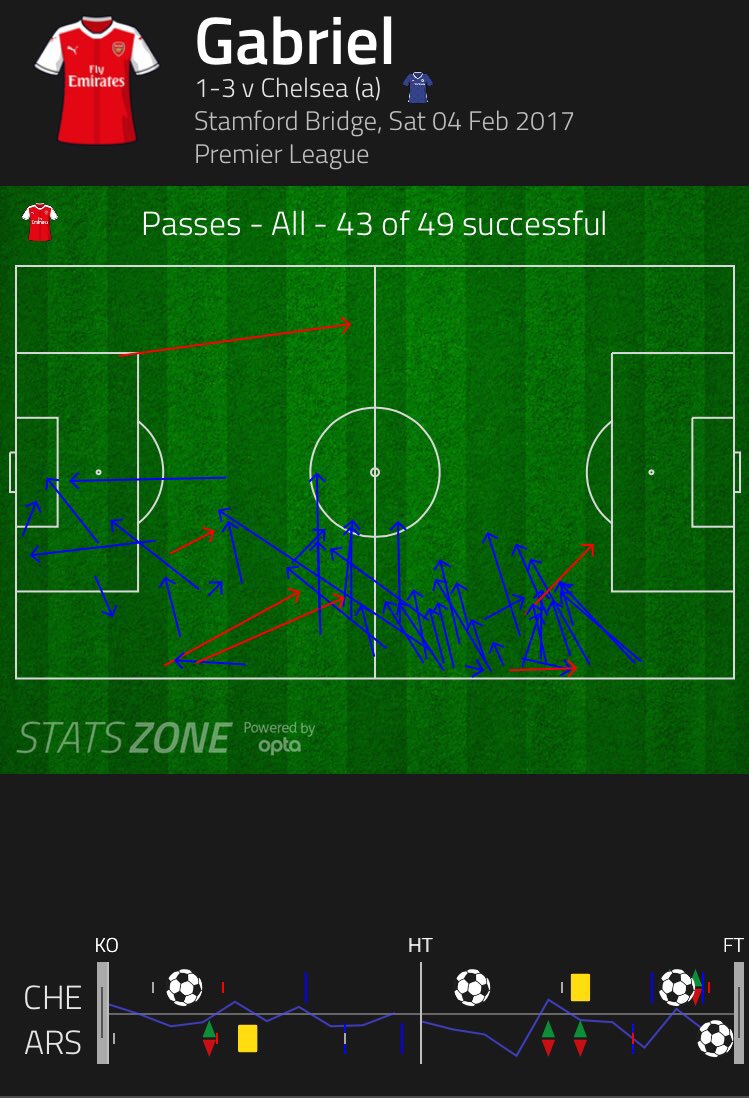 If a risk-averse, atechnical centre back being asked to ‘do a job’ at right back can show for the ball and try to make life easier for his teammates, a central midfielder who when fit has been a mainstay of Arsenal’s midfield for the past two years, has no excuse.