An Alex Iwobi inspired Arsenal were well on their way to staging a second half comeback and digging their way out of a hole that was completely of their own making, but instead dug their way back into it, while Watford watched on.

Arsenal were deservedly 0-2 down after 13 minutes of a listless first half display and it could have been double that by half time. They were slow out of the blocks, playing far too casually. While the hosts failed to register a shot on target in the first half, the situation was still fully salvageable at that point, providing the right adjustments were made.

There was nothing special or clever about the way Watford played. The visitors’ performance had all the hallmarks of a lower league side in a cup tie giving it everything for the opening half hour and utilising a fairly basic press to disrupt the bigger team. All Arsenal had to do was see this spell through, then use their superior fitness and quality to force mistakes later on and exploit them, as they had done at Preston and Bournemouth earlier in the month.

But what had happened? How had it come to this? Why were Arsenal 0-2 down inside 13 minutes? I mean, in terms of tangible causes, rather than just the unquantifiable ‘passion’ or ‘mental strength’ you regularly overhear things about en route to the pub or the tube after the match.

Team selection had a lot to do with it. As we’ve seen with Arsenal this season, the success or failure of bedding in a new partnership has been facilitated by familiarity around it. At the start of the season, when Shkodran Mustafi was being integrated into the back four and a new front three were being trialled, Arsene Wenger opted for a variant of his conservative safety blanket Cazorla – Coquelin midfield to bridge the gap and offer some familiarity and coherence.

On Saturday in Southampton, Arsenal’s makeshift midfield trio was given the best chance to succeed by the selection of a functioning back four behind them and a fluid front three ahead of them.

On Tuesday, the pairing of Francis Coquelin and Aaron Ramsey, who have rarely been paired together in central midfield on account of being largely incompatible with one another, were forced together as a result of no other recognised central midfielders being available.

However, unlike Saturday, this odd couple were not given the best opportunity to thrive by the team selection and it’s unsurprising that they failed to stamp their authority on the game and Arsenal’s passing game never settled into a rhythm, partly due to Watford’s basic press.

Arsenal’s midfield had something of a bottleneck ahead of them, in the form of Olivier Giroud who was selected against a relatively immobile backline. There’s a time and a place for utilising Giroud’s skillset, but last night’s starting line-up wasn’t it. It prevented Arsenal from establishing a pressing game of their own and really getting after the visitors early on.

Giroud himself was set up to fail, being deprived of players conducive to his game who he combines well with, in Theo Walcott, Lucas Perez, Hector Bellerin, with only Ramsey for assistance. As Watford didn’t have to worry about line-breaking runners, they were free to squeeze up from the start and press Arsenal.

Pressing and playing on the front foot may have been Arsenal’s best bet of getting the ball into dangerous areas in the attacking third, as they weren’t able to call on the passing of the suspended Granit Xhaka. Arsenal’s abject failure to get the ball forward demonstrates how crucial he is to Arsenal’s ball circulation and central build-up play from deep.

When you lack any sort of central build from deep midfield, both your fullbacks become crucial to progress play and break down the opposition. With Bellerin still recovering from his ankle injury and not yet fit enough to play twice in 3 days without further aggravating it, Gabriel was drafted in at right back.

In home games against lesser sides, intelligent ball playing fullbacks are often left open and can be a valuable asset in ball circulation and breaking the opposition down. An example of this is Bellerin coming on against Stoke in December and Burnley last Sunday. By contrast, Calum Chambers was fully ineffective in breaking down Watford’s stern resistance in the FA Cup defeat in March 2016. While Bellerin looked every bit a modern fullback, Chambers looked every bit a centre back asked to ‘do a job’ as fullback. And that’s what Gabriel looked like last night as well, much to Arsenal’s detriment.

Deploying Gabriel and his remedial ball skills at fullback wasn’t an issue in December or January with Xhaka’s ball playing ability at the base of midfield to help progress play. However, with Xhaka’s technical prowess replaced as the first pass out of defence by Coquelin’s limited ball skills and lack of vision, Arsenal went into last night’s game realistically looking to play with 8 outfield players in possession and a huge disconnect between their defence and attack.

While Coquelin lacks in ball skills, he has forged his reputation on sniffing out danger and making swashbuckling tackles. One of those would have been most welcome ahead of Watford’s second goal, when he instead allowed Etienne Capoue to waltz through the midfield in a straight line completely unchallenged. 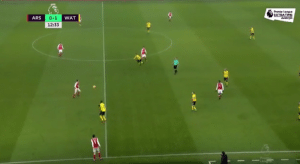 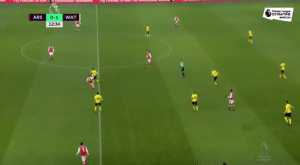 This situation came about after the former Spurs man had intercepted a ludicrously overzealous throw-in that Gabriel had presumably intended for Ramsey. 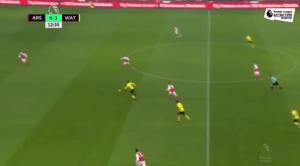 Despite his poor starting position, Coquelin got a good pursuit angle on Capoue and worked himself into a position where he could either attempt a challenge, or just clean him out an innocuous 35 yards away from goal. But he did neither. If we’re being kind, he hesitated. If we’re being harsher, he froze, he choked, he bottled it. Take your pick. 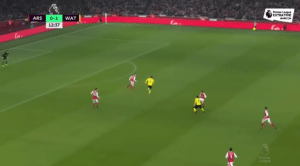 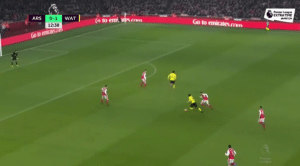 Perhaps Coquelin’s hesitation and inaction was as a result of the memory of his ill-fated lunge that nearly cost his team 2 points against Burnley. Regardless, it proved costly and his decision to not challenge Capoue was mad, frankly.

Arsenal managed to gain a foothold in the game after the break after withdrawing Giroud and switching to the fluid front 3 from the start of the season of Walcott, Alexis Sanchez, and Iwobi. The Nigerian was Arsenal’s brightest player in the first 22 minutes of the second half. His dribbling and associative play in wide areas continually troubled Watford, even after they made a switch to better deal with him. 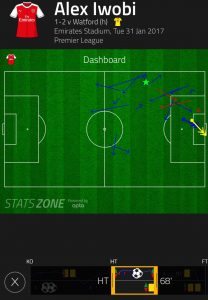 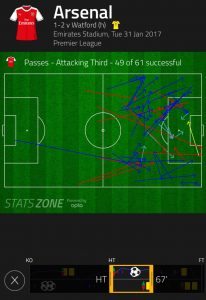 However, rather than chipping away and persisting with something that was clearly working and had already brought success in the form of a goal, Arsenal elected to twist and go double or quits. It turned out to be the latter. 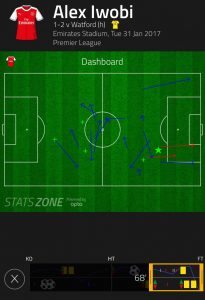 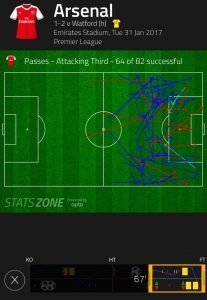 Shifting Iwobi central and bringing on Perez with 23 minutes plus stoppage time to go killed Arsenal’s momentum and allowed Watford to gain a foothold in the game.

Persisting with the effervescent Iwobi in wide areas for even another 13 minutes would have likely panicked Watford and resulted in more goal scoring opportunities. Even if it hadn’t, there would still have been 10 minutes plus stoppage time to throw Perez on and go for broke.

Arsenal’s initial team selection set them up for a fall and they fell in a big way. After Iwobi’s work in wide areas in the first 22 minutes of the 2nd half provided a crutch with which to help them up, he was moved into an area of the pitch where he was less effective. As such, Arsenal were unable to fully dig themselves out of the hole of their own creation and they floundered. The move completely killed Arsenal’s momentum and the decline in Iwobi’s influence was representative of the team as a whole. he was the driving force behind that brief 22 minute resurgence.

How Arteta’s gamble paid off vs Southampton