Arsenal have dropped to fourth in the Injury League table after Mohamed Elneny and Aaron Ramsey both picked up a calf strains.

Egypt may be through to the Africa Cup of Nations semi-final to face Burkina Faso but Elneny won’t be joining them after picking up a calf strain, which kept him out of his country’s quarter-final win over Morocco (1-0).

Aaron Ramsey also strained his calf during Arsenal embarrassing 2-1 loss at home to Watford on Tuesday.

As a result, Arsenal, who previously only had Santi Cazorla out of action, now have three midfielders sidelined and drop to fourth in the Injury League table.

Elsewhere, Sunderland are still top with six players out, while Hull and West Ham are second and third with eight players out each. 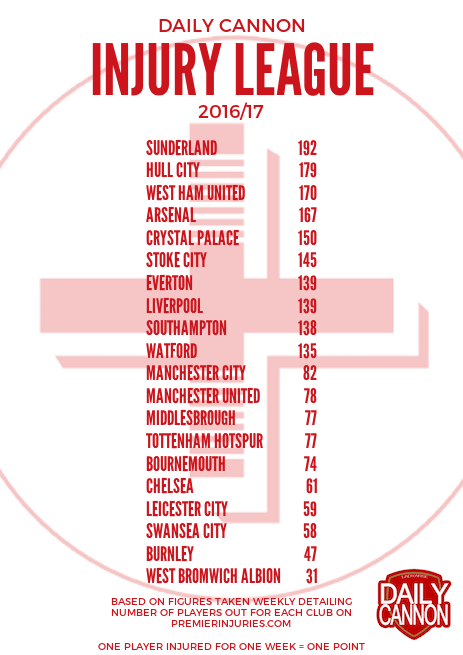 Here’s who’s out for the top four Injury League teams.

Marc Overmars would prefer Arsenal over Newcastle but Barcelona over both

Smith Rowe: It looked quite difficult but it was easy

Michael Ciani recalls approach from Arsenal & why it fell through