Back in January, Arsene Wenger was handed a four-match touchline ban for an altercation with fourth official, Anthony Taylor, during Arsenal’s 2-1 win over Burnley in which the media reported the manager had called Taylor a “f**king cheat”; unsurprisingly, this wasn’t the case at all.

The FA has released Taylor’s report, which reveals that although Wenger did tell him to “f**k off” twice and referred to his as “dishonest”, the work “cheat”, which most papers reported the following day, wasn’t used at all.

“Following the award of a penalty kick against his team in approx. 92nd min, Mr Wenger left his technical area to confront me in disagreement at the decision,” claimed Taylor.

“Before he said anything I said: ‘Think carefully before you say anything.’

“He responded by saying ‘you are dishonest to your federation.’ I considered this to be questioning both mine and the referee, Jon Moss’s integrity and impartiality. I stated to Mr. Wenger that such a comment was not acceptable and he told me to “f*** off” on two separate occasions.”

At the time, Wenger was dragged through the mud for apparently calling the match official a “f**king cheat”, with the likes of Dave Kidd of The Sun calling the Frenchman a “disgrace” over it.

The word “cheat” was in almost every headline and appeared to be the main reason the press were so riled up – not the swearing, as you might expect.

Even the outlets who didn’t lead with the headline that Wenger had branded Taylor a cheat, mentioned it in their article, despite is actually being completely incorrect. 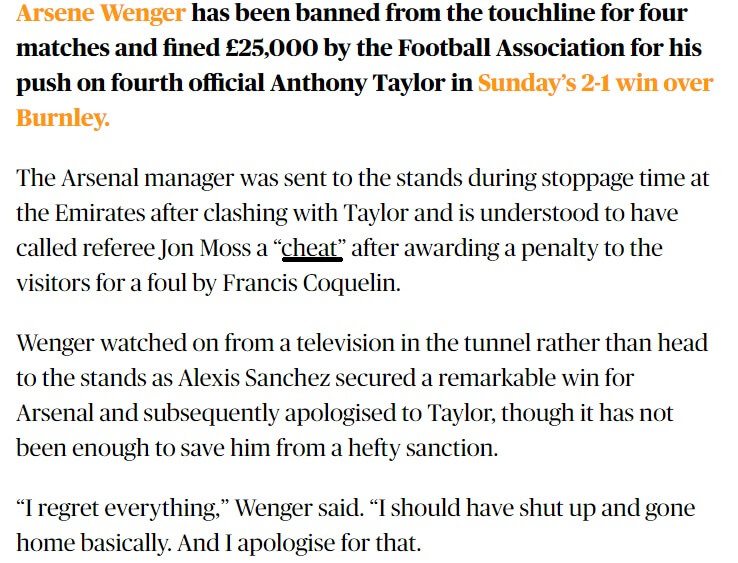 This is a prime example of how one paper can either receive wrong information or straight-up lie and everyone else will run with it.

Wenger has now served his four-match ban, regardless of what was said, so now it’s time to move on.

Mohamed Elneny fitness latest: When will he be fit?

Pepe’s agent insists he remains determined to succeed at Arsenal

What Marcelo Bielsa said about his former player Nicolas Pepe

Are Arsenal fans being unfair to this player?