Arsenal have lost three more players to injury this week but will they be back in time for the Gunners’ trip to Liverpool on 4 March?

As well as the usual suspects, Arsenal now have a few more players sidelined.

People are probably starting to question whether the little Spaniard exists following two surgeries on his ankle.

Recently, the midfielder was spotted on a night out with Nacho Monreal, still unable to wear a shoe on his bad ankle/foot. Since, there’s been no news, which means he definitely won’t be ready for Liverpool.

The midfielder was subbed off during Arsenal’s embarrassing 2-1 loss to Watford at the Emirates on 31 January.

Arsene Wenger did say at the time that he would be out for three weeks and considering we haven’t had any word since and no one’s mentioned him being back in training, it’s fair to say that he probably won’t make the Liverpool clash.

Kos was subbed off early on in the second half during Arsenal’s 5-1 loss to Bayern.

Shortly after the match, he described feeling pain in his right thigh, which left the centreback out of the trip to Sutton. However, he probably would have been rested anyway.

Apparently, Kos should be training again by the weekend. Here’s hoping he’s ready for Liverpool since we clearly can’t cope without him.

The forward posted a concerning image of his ankle/foot strapped up on his personal Snapchat following Arsenal’s 2-0 win over Sutton on Monday night. 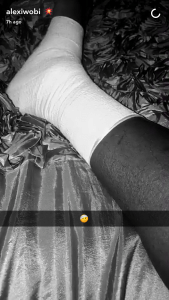 Fortunately, it appears that he just got a kick and he’ll be alright to face Liverpool.

After struggling through the Africa Cup of Nations, it seems that Elneny’s calf has finally given up.

The midfielder picked up a mild calf injury while away with Egypt but appeared to recover and even featured in the final against Morocco where he scored his country’s only goal.

However, the FA Cup clash against Sutton proved too much and he had to get subbed off.

Apparently, Elneny is due to be assessed and no timescale has been given for his return.

Reports emerged this morning (Wednesday) claiming that Ozil had been granted an extended break after suffering ongoing back problems, which caused him to miss the trip to Sutton.

However, Arsene Wenger soon came out and explained that he was due back in training on Thursday like everybody else, which suggests that he will be available for Liverpool.

Thomas Partey to be ‘assessed’ before Manchester City game

Arsenal 20-year-old to return from ligament injury next week

1 in, 1 out: Thomas Partey and Kieran Tierney injury updates