Two moments of madness from central midfielders nearly saw Arsenal throw away what had looked like a safe three points in an accomplished performance against Burnley.

The first of these moments saw Granit Xhaka dive in two-footed at Steven Defour, who had intercepted a rare slack pass. Regardless of whether you thought the challenge was worthy of a red card or not, it was foolish of him to give Jon Moss the option to send him off. It was an unnecessary lunge in a totally innocuous area of the pitch. His dismissal placed additional pressure on his teammates who remained on the pitch and made their jobs harder.

That being said, the game situation was by no means terminal.

The second incident saw Francis Coquelin respond to casually miscontrolling the ball in his own box by dangling a leg and bringing down Ashley Barnes in the third minute of second-half stoppage time. The reaction of Nacho Monreal was representative of all the home supporters in attendance and those watching around the world.

Monreal with the greatest reaction to a penalty I think I've ever seen. pic.twitter.com/rnRIPqN6KA

Given how late it was in the game and how little time Arsenal would have to find a winner, this was potentially terminal.

The irony of both of these ill-advised lunges was that they punctuated what had up to that point been good individual performances by both men. After coming on, Coquelin played the situation well and was impressive without the ball. Before being dismissed, Xhaka had made impressive usage of the ball and had also looked accomplished covering angles without it.

In addition to the length of Xhaka’s suspension, Arsenal will also be inconvenienced by the timing of it. The midfield trio of Xhaka, Aaron Ramsey, and Mesut Özil which had excelled against Swansea was once again ticking along nicely against Burnley. The three are developing an excellent understanding and were central to everything good that Arsenal did in the opening 65 minutes of the match. They have reignited a season that was stuttering badly, partly due to disjointed midfield play and partnerships with suboptimal compatibility.

They were ably supported by Alex Iwobi, who continues to go from strength to strength in 2017. Iwobi was given license to roam from the right, occasionally forming something of an angled midfield four with Xhaka, Ramsey, and Özil. He is the player external to the trio whose game has most benefited from their presence. He’s really shone in his last two performances and is playing with a sense of freedom and swagger that deserted him briefly when he went off the boil in November when playing in sides with less in-tune midfields.

Independent to this core unit was Alexis Sanchez, given license to create havoc from the left. He didn’t have his best game, with his decision making on the ball being somewhat predictable and defenders able to set up to nullify him cutting inside. However, what Alexis always gives you is a player who can step up in the moments and make telling contributions. This is why managers are reluctant to take him off when chasing a goal, regardless of how poorly he is playing up to that point. He again demonstrated this with his calm and precisely executed last minute penalty. You need a man for the moments, but the moments make the man.

While it wasn’t really happening for Alexis in the final third in the first 96 minutes of the match, he linked well with Monreal in Arsenal’s build-up play. Technically accomplished and intelligent fullbacks who are good on the ball and time their attacking runs well can be a real asset against opponents who come and sit deep.

However, it would be wrong to say that Burnley just sat deep in the same way as Tony Pulis had instructed West Brom to when they came to the Emirates. While there was a lot of focus on maintaining shape and denying Arsenal space, Burnley also came with a plan to prevent Arsenal from playing goal kicks short and building from the back by squeezing up. The visitors looked to force Petr Cech to kick long. Unlike at the start of the season when Arsenal were playing Alexis up front, Olivier Giroud’s presence up front theoretically gave the Gunners a better chance of competing for the first ball. However, in practice, Cech’s kicking was remarkably poor and only 9 of the 21 long passes he attempted found a teammate. 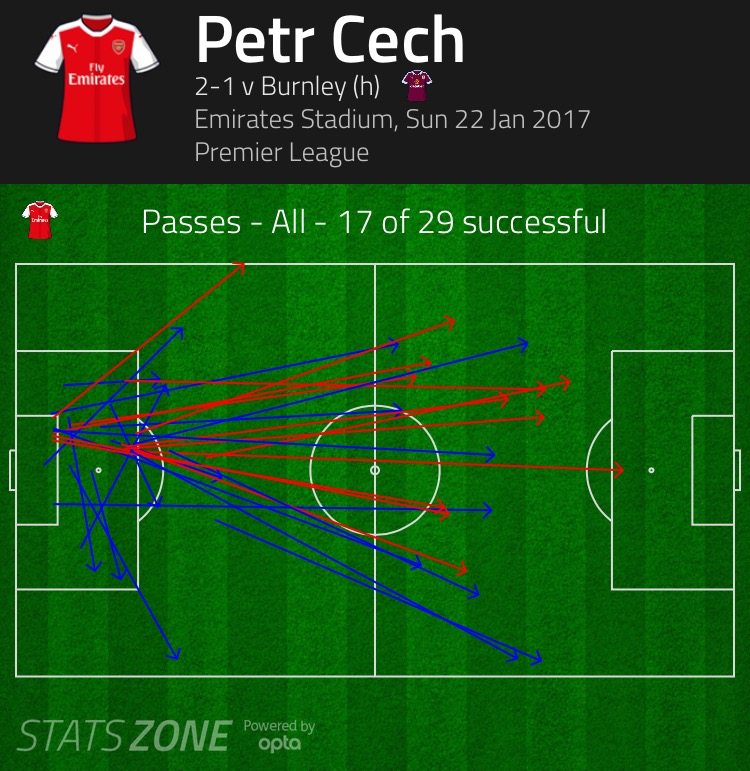 This in itself wouldn’t be as concerning had Cech’s distribution not been quietly underwhelming throughout the season. While it isn’t a one off, it is one of the more concerning kicking performances as he had a lot in his favour, given Giroud’s presence and the weather not being an obstacle.

While the past couple of performances have been enjoyable and bode well for when Xhaka is available again, it’s now up to Wenger to put something together that will be able to overcome Southampton, Watford, Chelsea, and Hull.

So what exactly are Arsenal losing in Xhaka?

He has been great at initiating Arsenals attacks from deep, particularly through picking out Özil or Ramsey between the lines when looking to break down a stubborn opposition defence. He’s also been very effective at springing quick counter-attacking opportunities with his vision, release, and range of passing. Arsenal simply don’t have an available player as capable as him at doing what he does at the level he does it.

Xhaka’s presence enables the rest of his teammates to play their own natural games and helps the cohesive collective thrive. Without him, Arsenal will likely play a disjointed midfield unit and rely on building down the flanks through the fullbacks or relying on individuals to step up in moments.

In order to still be in the game when these moments arrive, Wenger’s men will have to control the space better. Coquelin’s 20 minutes before his error was more encouraging in that respect and suggests it’s something the team have worked on in training since they’d failed so spectacularly to control space at Everton and City.

The next few games won’t be pretty, but Arsenal have shown in the past that they can dig in and win ugly and they’ll have to do it again.

How Arsenal saved their season in 20 minutes

What could have been: Why Arsenal could only draw with Benfica

How Mikel Arteta’s subs almost messed up his excellent gameplan

How the law conspired to rob Arsenal against Wolves