For the fourth straight year, Arsenal’s festive fixtures featured a frustrating display on the South coast.

Unlike the past three seasons, this year’s lacklustre display came in Bournemouth, rather than Southampton.

Arsenal’s fortunes in their first two games of 2017 varied considerably. This was largely due to the relative plans of their opponents.

Crystal Palace turned up at the Emirates and were as almost as passive as West Brom, sitting off the Gunners and allowing the home side to fully dictate the game. Granit Xhaka was imperious in orchestrating play and controlling the tempo, but there was little to talk about, beyond his commanding individual performance and the move leading to Olivier Giroud’s spectacular goal.

Tuesday night, Arsenal went away to play a Bournemouth side who, man-for-man were arguably less talented than Sunday’s Palace squad. However, the one key thing Bournemouth had in their favour over Palace was a basic gameplan. Every Bournemouth player understood the gameplan of how to make life difficult for Arsenal and they executed it well until Eddie Howe’s dreadful substitutions just after the hour mark.

Tactics are a way of generating a competitive advantage over your opponent. All working towards executing the same plan gives a team an edge over a more technically superior group of opposition individuals. Developing a functioning system is a way of minimising the effect of the weaknesses of the individuals who make them up and forming a unit that’s greater than the sum of its parts.

In the right set-up, you can look after a shaky centre half or a central midfielder who lacks imagination in possession. Not one of those Bournemouth players would make Arsenal’s first XI, but they turned up with a set of instructions and were comfortably the better side for the first hour because they had an effective plan.

This isn’t the first time in 2016/17 that Arsenal have struggled when faced with a competent opponent who has turned up with an actual plan for negating their strengths and been able to implement it. Man City, Everton, Spurs, and Middlesbrough, have all taken points off Arsenal through careful planning and competent execution. City and Spurs came from behind after making subtle in-game adjustments to their approach.

Indeed, Arsenal themselves have made in-game adjustments of their own to secure late wins against Southampton and Burnley sides who were almost able to successfully see out their plans to frustrate the Gunners and escape with draws. Moreover, it raises the issue that most of Arsenal’s domestic wins this season have come against disorganised sides in various degrees of disarray.

That withstanding, Arsenal have still had to turn up on the day and go out and get the job done against the likes of Hull, Swansea, West Ham, Stoke and the like.

For the first hour on Tuesday night, Arsenal were unable to impose themselves on the game in any way, shape, or form. They looked second best in every department.

Bournemouth’s midfield denied their Arsenal counterparts time and space to play. When an Arsenal player was in possession in the middle of the park, they were quickly swarmed by black and red shirts. Bournemouth’s midfield were also good at getting back in and protecting their extremely soft-centred defence, looking to crowd Arsenal out around the box and force the visitors to circulate the ball in an unthreatening U-shape. Bournemouth would either look to sit back and intercept the ball, before springing a counter, or wait for Arsenal to dither in possession, as Coquelin and Mustafi did in the lead-up to the penalty incident, before nicking it and springing a counter.

At 2-0 up, Bournemouth grew in confidence and looked to push up and shut Arsenal down as they looked to build from the back. This resulted in sloppy passes and loose touches, preventing Arsenal from building any momentum. If Arsenal advanced the ball into the middle third of the pitch, Bournemouth would quickly retreat back into their shell and protect their back four. These fairly basic tactics helped put every single Arsenal player even further off their game than they had been when the match kicked off. Arsenal were second best in every department and Bournemouth were deservedly 3-0 up on the hour.

Facilitated by Howe’s foolish decision to withdraw all of his players with pace, Arsenal were able to get back into the game. Now Bournemouth did not carry the same threat in aggressively pressing Arsenal’s backline high up the pitch when they were trying to play out, or command the same respect on the counter, Arsenal could afford to play more freely and commit more men to their own attacks.

While Howe’s in-game adjustments considerably weakened Bournemouth, Wenger’s strengthened a hitherto listless Arsenal. Lucas Perez looked bright after coming on for Alex Iwobi, who had struggled when deputising for the ill Mesut Özil. Alex Oxlade-Chamberlain, who had looked completely cut off on an island since he’d come on for the hamstrung Coquelin started to get involved in the game. Most crucially, Alexis Sanchez started to come inside from a deeper position on the left, which rendered his natural wide game less predictable than usual.

When playing on the left, Alexis usually looks to cut inside onto his right foot at some point in the final 20 yards of the pitch. It gets incredibly predictable and easier to set up against. However, in the second half against Bournemouth, he started making his cut 10-15 yards deeper. As a result of this, he could either play the ball with his right foot earlier and from a deeper position. In addition to being able to feed Giroud earlier, Alexis playing the ball from deeper also opened up the possibility of him feeding one of the central midfielders, before making a run to receive the ball back from them in a more advanced position himself. It kept the fullback guessing.

As soon as they’d conceded one goal, Bournemouth did as Arsenal had when leading against Spurs, Everton, and City and dropped far too deep. Bournemouth didn’t put pressure on the ball, carried even less threat on the counter than Arsenal had in the aforementioned games, and you sensed it was only going to be a matter of time until they conceded again.

Lucas Perez, who looks every bit the player Wenger wanted Lukas Podolski to be but never could be due to the German’s own lack of effort and initiative, deserves more credit than he’ll get for his clever movement and technique in striking the second goal. He could be a really useful player moving forward and can contribute from anywhere in the front three, depending on what the game situation demands at the time.

Even after Giroud’s equaliser, Harry Arter had a chance to win it for the hosts.

Much like his teammates throughout the course of the match, he followed what appeared to be a deliberate policy to target Petr Cech’s well-documented weakness at the near post.

Taking potshots from range out of consideration, all of Bournemouth’s shots from prime positions followed this trend. While Bournemouth are only the second club to noticeably target Cech’s inherent weakness to this extent after his former club Chelsea last January, it gave them two of their goals last night and nearly a late winner, too. I wouldn’t be surprised if more sides pick up on it and look to beat him in the same way. 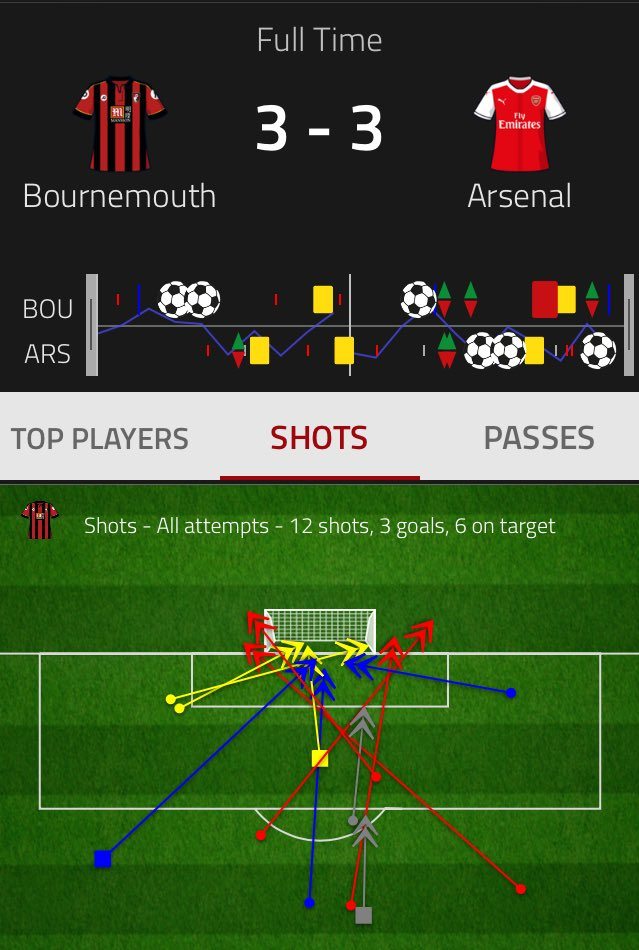 Tuesday night served as a timely reminder that no team can just pitch up on the day and expect to win 2-0.

You have to make it happen.

When an opponent turns up with a plan to make it difficult for you, you have to make your own in-game adjustments to overcome the plan. A team and a manager with more about them than Bournemouth and Eddie Howe could then counter this with yet another switch of their own to counteract your own adjustment.

Arsene Wenger is a manager who likes his players to go out, express themselves, and find a way to work out problems posed by the opposition on their own.

He is ‘a facilitator of what is beautiful in man.’

When they prove that they can’t do that, he’ll switch it up with 25 minutes to go.

In certain matches over the past two calendar years where he’s shown respect to the opposition, he’s devised more prescribed gameplans, such as Man City and Liverpool in 2014/15, then United, Bayern, City in 2015/16, and Chelsea in September just gone.

Perhaps something more of a compromise is required and a level of more prescription and structure against competent middling sides as well, especially away from home.

Arsenal 20yo reaches AFCON quarter-finals after another appearance