Lucas Perez is very quickly becoming a player I like a lot.

The forward, who signed for Arsenal from La Liga club, Deportivo, in the summer for a reported £17m had a shaky start to his career in north London. He struggled for game time and then, when he did, he picked up an ankle injury against Reading in the EFL Cup.

Boy, have times changed, though.

The 28-year-old got handed another start against Preston North End in the FA Cup and the forward demonstrated exactly why he should be starting on the wing consistently in the Premier League.

In the first half, when Arsenal were being generally terrible, he was the only player to have shots and attempting to make runs. They didn’t succeed but the guts were there – something the rest of the team was lacking.

His assist for Olivier Giroud’s last-ditch goal was sublime and demonstrated that the Spaniard has far more vision than many gave him credit for.

Lucas Perez has contributed to 11 goals (6 goals, 5 assists) in 12 appearances for Arsenal this season. #afc. pic.twitter.com/oKTUxEv2vh

Unsurprisingly, apart from Aaron Ramsey (8.3) who scored a stunner to put Arsenal back on level terms, Lucas got the highest rating on WhoScored (7.9).

He had three shots and had a pass success rate of 87%. Completing 34/53 passes. And, as you can see from his heatmap, although he was positionally sound, he was happy to get back and defend as well. 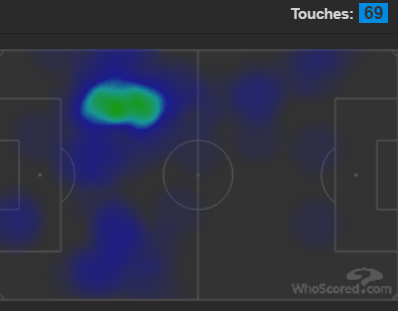 If he doesn’t start against Swansea, I’d be surprised.

Why Arsenal lost to Southampton and desperately need a #10

Fan spots what Ramsdale & Gabriel did before Aubameyang penalty