Goncalo Guedes found the net twice as Arsenal scouts watched the player from the stands.

The goals were timely but this is not the first time that Arsenal have scouted the Portuguese player. The club were reported to have held a meeting about him back in the summer.

In fact, the links with Guedes have been consistent for a while now leading me to believe there could be something of substance to them. 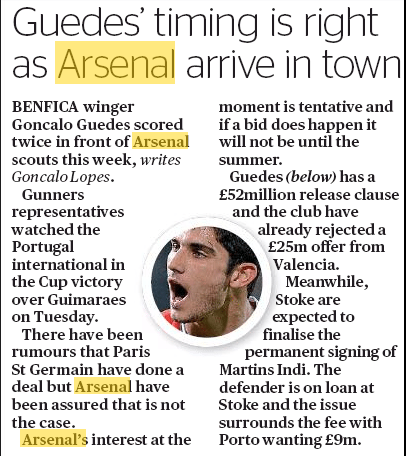 This report from the London Evening Standard claims that Arsenal’s interest is ‘tentative’ at the minute, but that would’t seem to tie in with how this story has tracked over the past six months.

His release fee stands at a whopping £52m which is quite something for a player yet to gain a full international cap and who has only managed two goals (and three assists) in 15 league appearances this season.

It would also seem to be a price that would put Arsene Wenger off significantly, although the state of finances in Portugal means that a substantial offer over the £25m which has already been rejected, but below the £52m release clause, could be successful.

Would Wenger really go that high for a 20-year-old player who hasn’t really done much to earn it?

Hmmm….seems unlikely if you ask me.

Folarin Balogun being watched ahead of January move