Arsene Wenger’s half time words and tactical tweaks enabled Aaron Ramsey to spark what had looked like an unlikely Arsenal comeback against a spirited Preston North End side at Deepdale on Saturday.

The manager must take some of the credit for this turnaround, as he was seen exchanging a mutual thumbs up with Ramsey in the aftermath of the equaliser. Given what had happened in the first half and what would happen as the second half unfolded, I’m inclined to believe that the manager encouraged Ramsey to get forward more, think less and trust his instinct more when in and around the box, and take more risks. And it paid off.

In this season’s system, the second midfielder in between the man at the base and the number 10 is often given the opportunity to pop up in space in threatening positions in and around the opposition’s penalty area. What Ramsey has over Mohamed Elneny and Francis Coquelin who have also spent time in this role this season, is an eye for goal and a proven track record of finding the back of the net. While you could contend that his teammates, on international duty and injured respectively, are arguably stronger in other areas of the game, Ramsey’s superiority over them in the final third is unquestionable.

The winner also came about as a result of good work from Ramsey. A physically drained and mentally exhausted Preston were sitting back, looking to hold on valiantly for the final minutes of stoppage time before forcing a money-spinning replay. The lack of pressure on the ball gave Ramsey time and space in a deeper position on half way. He was able to pick out a perfectly weighted diagonal to Olivier Giroud. Giroud headed on for Lucas Perez, who was then able to backheel it back into the path of the Frenchman, who poked it in at the keeper’s near post, reminiscent of how Ramsey himself had famously done in the 2014 FA Cup Final against Hull.

That was Perez’s 5th assist to go with 6 goals in his first half season at Arsenal. However, almost as important as his tangible quantifiable involvement in the winner was his intangible and unquantifiable role in Ramsey’s equaliser. While he was aware he probably wasn’t going to receive the ball himself directly from Alex Iwobi, he acknowledged that he could make life easier for a better-placed teammate. 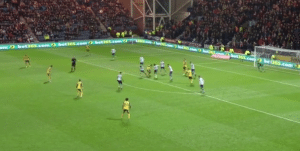 Had Perez remained static, Aiden McGeady at the bottom of the screen would have rushed out to close down Ramsey as the ball was played by Iwobi, after his lovely bit of skill. 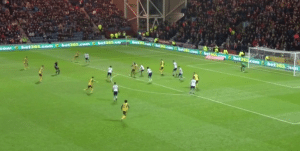 However, as Perez made a movement in behind to receive a potential pass from Ramsey, McGeady had to follow him, affording Ramsey more time on the ball. Ramsey then picked his spot and fired past Maxwell. 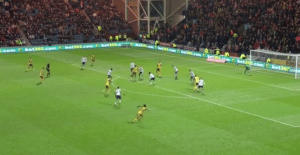 Perez’s run may have only been a minor movement, but it had a major knock-on effect and made life a lot easier for one of his teammates in a good attacking position. His brain was engaged and he instinctively knew how he could help his teammates. He then had the initiative to make the move and take the man with him. It’s the little things like that Perez run, which less nuanced players like Coquelin, or less altruistic ones like Lukas Podolski in days gone by, wouldn’t have made, that can make a massive difference to a team trying to turn a game.

One valid criticism of Arsenal’s performance on Saturday was that they’d got themselves into a position where they’d needed to turn the game in the first place against lower league opposition. An uncertain and stuttering start had seen them deservedly go 1-0 down after 7 minutes. A more clinical Preston side should perhaps been 3-0 up at half time.

In the first half, Arsenal weren’t so much a unit as a loose collective of individuals. The front four were cut off from the rest of the team and it was clear to see that the back four had never played together before. Behind them was a goalkeeper who not only showed no assertiveness but also appeared to sap all confidence from them. While Petr Cech has struggled this season, David Ospina has not shown enough to usurp him. Granit Xhaka also struggled, looking a little leggy having played every minute of every game since November 27th, barring the first 42 of the league cup defeat to Southampton.

Given the combination of personnel on the pitch at Preston, there’s little point discussing Arsenal’s structure and drawing overarching conclusions about the midfield’s prospects in the next month while Elneny is on international duty and Coquelin and Santi Cazorla remain sidelined by injury. What’s most important is that Arsenal had players who delivered in the key moments and got their name in the hat for the next round.

Why Arsenal were taught a lesson by Chelsea: Tactics breakdown