After being frustrated for 86 minutes, Arsenal finally broke the deadlock against a dogged West Brom side thanks to an Olivier Giroud header.

After losing two important matches in a row, all that matters in the next one is getting back to winning ways. The manner of the performance itself becomes far less relevant. However, you still have to pick a team that is capable of going out and getting the job done against the specific opposition.

Giroud was rightly selected to play against West Brom’s deep defensive line and compact midfield. However, he was not given his favoured supporting cast who bring the best out of him. Aaron Ramsey was understandably eased back in after recovering from yet another muscle injury, while Theo Walcott was ruled out with a minor injury of his own. These two players are the best Arsenal have at running on to Giroud’s flicks and knockdowns.

It’s all well and good playing Giroud against packed defences, but to get the best out of him you need to provide service and support runners. Otherwise you’re setting him up to fail and he’s tasked with as much of a thankless task as Salomon Rondon was given for West Brom, playing up front on his own cut off from the back six and midfield three. If you’re not going to play to Giroud’s strengths, you might as well not play him.

While Giroud may not have had as much support from runners as he would have liked until the substitutions started taking place after 70 minutes, he was still afforded some service in the opening 25 minutes of the second half. This had not been the case when he had been thrown on against Everton and City. Although it was ‘only West Brom’ it was encouraging to see that Arsenal had learned from a big, but basic, mistake that they had repeated in their trips to the north west.

Despite the absence of Arsenal’s two best behind the line runners, there was hope that perhaps Mesut Özil could continue playing as a second striker, running beyond the frontman as he has since the Watford game. However, with Giroud back in the side, he reverted to more of a conventional number 10 role, as he played last season. While this isolated Giroud somewhat, it enabled Özil to drop off into pockets of space in the attacking third to feed him and any runners who would happen to join him. This is ultimately how the goal came about.

While Özil was dropping off into pockets to find space, he didn’t need to drop back as deep as the half way line to also initiate Arsenal’s attacks as he had done last season. He now has Granit Xhaka to do that for him. After yesterday, the Swiss dynamo now holds the record for the most touches and most passes in a premier league game this season. He was the metronome at the centre of everything Arsenal did. When an opponent turns up and plans to sit deep, as West Brom did, it’s easy to get sucked in and play the game they want you to play, at a walking pace. It’s largely thanks to Xhaka and his usage of the ball that Arsenal were able to keep circulating the ball and gradually wear the resolute opposition down. 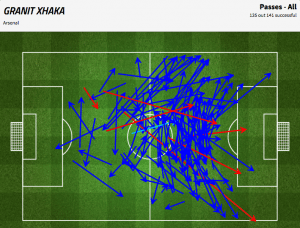 It was encouraging to see Arsenal, led by Xhaka, step up their intensity and the speed at which they moved the ball after the break. This in itself shouldn’t be something that’s celebrated, but given the context of the last two matches, it was an important show of defiance and resolve. Flat starts to the second half at both Goodison and the Etihad had invited pressure and allowed Arsenal’s opponents the opportunity to get back into games they had fallen behind in.

With Giroud selected to lead the line, Alexis Sanchez reverted to playing from the left, with Alex Iwobi picked on the right. While you would think that the wide men operate best from the opposite sides, this was a deliberate tactical ploy, devised to capitalize on Tony Pulis and his comical aversion to traditional fullbacks. Iwobi was tasked with tucking in, creating an additional ball playing central midfielder for Arsenal, dragging West Brom’s nominal wide player with him to cover, and leaving acres of space for Hector Bellerin to overlap into.

Against packed defences, fullbacks who make intelligent runs and are good on the ball can be a real asset in helping smash through the parked bus. Bellerin played most of the match as a right sided midfielder, free from the worry of getting caught up the pitch, as Allan Nyom clearly wasn’t up to much. Bellerin himself nearly opened the scoring after getting into a good position in the box, but his header was off target.

Kieran Gibbs also bombed forward on the other side, but his end product isn’t as good as Nacho Monreal’s. With both fullbacks looking to join the attack, it was important that Arsenal’s CBs were alert to balls pumped down the channels for Rondon to chase. Laurent Koscielny in particular was tremendous.

Arsenal’s next game comes against Sam Allardyce’s Crystal Palace. Playing against Pulis would have been good preparation for a manager likely to set up the same way. One thing to be thankful for is that he won’t have had much time in training with his new players yet, so may not have yet eliminated Palace’s incompetence at set pieces.

Tactics Board: Fortune favours the brave as Arsenal progress