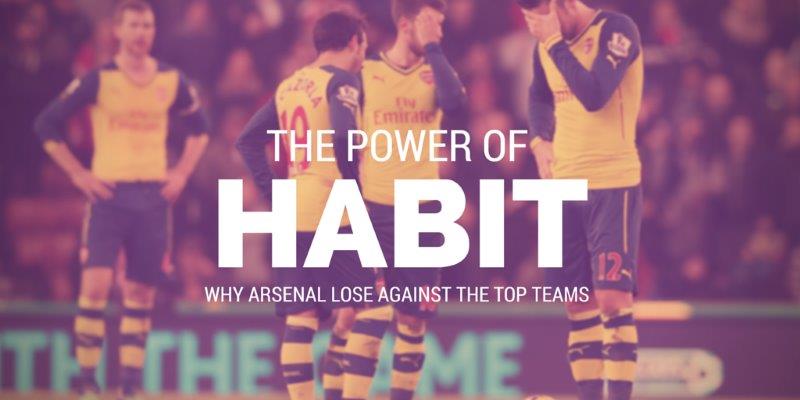 [This post was originally published 14th Jan 2015. It has been updated and is still painfully relevant today]

We all have habits.

Some of them we are only too aware of while others allow us to go about our business in the world without overloading our brains and we don’t even notice that they exist.

Arsenal have many habits and one of them involves losing or, at the very least, being unable to win against other top sides in the division/Europe.

In the ten years between the Invincibles and 2014 Arsenal have played one of the traditional ‘top’ teams 64 times in the League. Playing and losing 29 of those while winning only 15 and drawing 20 means that losing could be considered a habit while ‘not winning’ certainly is.

If you decide you are no longer going to have doughnuts for dinner but end up having doughnuts for 49 out of 64 nights you certainly wouldn’t claim to be free of your doughnut-eating habit.

Not losing to the top sides has become the exception to the doughnut-eating rule for Arsenal.

Things are better now, but they’re still not great.

It’s not a matter of personnel

Arsenal have the players at the club who are more than capable of beating any team in this league. They have shown with sporadic performances against the likes of Barcelona, Bayern Munich, (a good) Borussia Dortmund, Manchester City, Liverpool, Manchester United and Sp*rs that they have the ability.

More often than not, however, they end up doing something stupid to gift the points to the other side. Iwobi’s goal against PSG on Wednesday night being a case in point.

The inspiration behind this post is a book I got for Christmas a few years ago, The Power of Habit: Why We Do What We Do, and How to Change

, and one I’d highly recommend.

There is one chapter in which the author talks American Football and the Tampa Bay Buccaneers.

A side forever losing and widely seen as one of the worst teams in the history of the game, they were transformed by a coach named Tony Dungy.

Dungy’s belief was that by changing the player’s habits he could transform them from perennial losers to champions.

Speaking about the techniques he tried to instil in his team, here he is recalling a game in which it all started to fall apart. He could just as easily be talking about Arsenal, especially away from home:

“We would practice, and everything would come together and then we’d get to a big game and it was like the training disappeared.

“Afterward, my players would say ‘Well, it was a critical play and I went back to what I knew’ or ‘I felt like I had to step it up.’ What they were really saying was they trusted our system most of the time, but when everything was on the line, that belief broke down.”

They stopped trusting and started thinking.

“They do ordinary things, but they do them without thinking, too fast for the other team to react. They follow habits they’ve learned.”

While his assistant, Herm Edwards, added

“Every play in football – every play – someone messes up.

“Most of the time it’s not physical, it’s mental.”

What stands out when you look at the few games Arsenal have won against the big boys is how free-flowing their performances have been. Played at an incredibly high-tempo they don’t have time to think about what they are doing and so rely on their instincts and their habits.

It is these instincts that are honed on the training pitch. Drills, much like in the army, are done so that the actions become as natural to the players as walking or running.

They don’t have to think, they just do.

Habits are the things we do when presented with a conscious or unconscious cue.

They are what shape our actions from what we do first when we get out of bed to the route we take to get to work. We are bombarded constantly with cues that trigger routines in order to obtain rewards. The cue is ‘It’s 7.45am on a weekday,’ the routine is ‘I walk to the bus stop and get the number 74 at 8am,’ the reward is ‘I don’t get shouted at by my boss for being late.’

You do it so often that you most likely don’t think about it, you just pick up your stuff, leave the house, and arrive at work having been guided by your autopilot. That’s a habit.

Arsenal’s cue against the big teams is the pressure they feel and the routine this engages is to panic, doubt themselves and over think what they are doing.

The cue –Oh bugger it’s Manchester United away. The routine – Overthink, panic, AHHHHH! The reward? That’s one I haven’t quite worked out yet, but even negative habits have rewards. Perhaps it’s the self-satisfaction that comes when even a negative belief about yourself is proven to be right -‘Ha! I knew I wasn’t good enough!’ Or the ‘mental strength’ story we get told when we’ve rescued a draw from the jaws of defeat.

At the top level a split-second can be the difference between clearing the ball and falling behind. Falling behind to a top side causes more pressure and the habit replays itself all over again.

Only when the side changes the routine and regains some confidence in themselves can they hope to compete without falling to pieces which is often why we see Arsenal perform so much better in the second half of these disastrous games – Arsene Wenger has had a chance to remind them what they are capable of at half-time and highlights that the worst has already happened so what else is there left to worry about?

They’re also playing off a slightly different cue at half-time than they were before the game started.

The cue – Feck, we’re three down. The routine – We’d better rally here. The reward? Not being humiliated in the second half as they were in the first.

We hear this called ‘mental strength’ quite a lot.

Of course, I am just assuming this is what Wenger says but you can be pretty sure that someone like him knows that shouting and screaming can only be effective sometimes.

When people, never mind just players, are underperforming it’s more helpful to encourage than denigrate. Think of your child in his or her first school play. Would you scream at them for forgetting their lines or gently encourage them to have faith in themselves?

Which would stand the best chance of a positive outcome?

None of this explains why this conversation isn’t had before kick-off but that’s a topic for another day.

Dungy began working on reshaping the Bucc’s habits and taking the decision-making out of their own hands. They were trained to the point where they knew no matter what happened on the pitch they’d know how to handle it and as long as they trusted in their coach and themselves and didn’t start second guessing, they’d come out on top more often than not.

From the laughing stock of the game, Dungy transformed his side into winners and he became “the only coach in NFL history to reach the play-offs in ten consecutive years, the first African-American coach to win a Super Bowl [with the Colts], and one of the most respected figures in professional athletics.”

All because of his work in changing player’s habits.

How do you get rid of a negative habit?

Well, sadly, the research shows that you can’t, you can only change it. You identify the cue and instil a different routine to get the same rewards. But you also need to have the belief that you can change it. Read the book, it explains it far better that I can.

As I mentioned, it’s not a case of Arsenal not having the personnel, although injuries surely do not help as the side continue to suffer more than all the other top sides. Nor is it a case of tactics or buying more players.

It is about their own belief in themselves and their ability to go toe-to-toe with the big boys.

It’s about their habits. Pure and simple.