Mohamed Elneny and Francis Coquelin completed the most passes during Arsenal’s 0-0 draw against Middlesbrough but, even so, the Gunners missed Santi Cazorla and Granit Xhaka massively.

This is a high number and more than any other players completed.

So, if our two holding midfielders were at the heart of everything, why did we miss Cazorla and Xhaka so much?

If you look at the two midfielder we had on today and where their successful and unsuccessful passes were, you can mostly see them passing sideways. The passes that they completed were usually safe, not designed to test anybody and certainly not helping the team create chances. 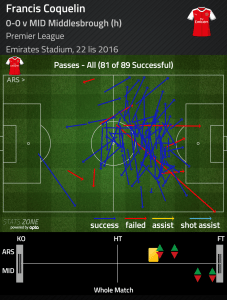 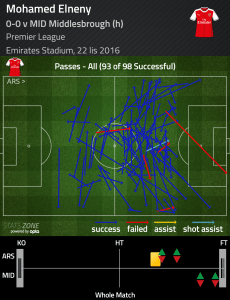 When Cazorla and Xhaka play, although they too pass sideways at times, they have that creative footballing brain and ability to pick out a player making a run in the 10-yard box. They pass forward. They have that vision that Coq and, as much as I like him, Elneny just don’t have.

That’s why we missed them so much against Boro.