On Sunday it was being widely reported that Bayern Munich and Real Madrid were getting ready to move for Mesut Ozil if Arsenal fail to meet his wage demands which are said to be around £250k.

This isn’t the first time that the duo have been linked with a move for the midfielder and it’s no coincidence that they are reportedly lurking once again as contract negotiations get underway between Arsenal and the German.

Why is it no coincidence? Because this is how agents get the best deals for their clients.

The story this week allegedly started with the Sunday Express who, if they’re anything like their sister, the Daily Express, have a terrible track record with transfer stories and accuracy.

The Express story was then picked up and repeated on numerous websites, giving it the surface impression of legitimacy.

In fact, the Express, in a piece about Ozil and Real Madrid claimed that Bayern Munich aren’t really an option because their chairman doesn’t like him. That was on 28 September when they also said that Ozil quite fancied a return to Madrid.

The day before, the Express reported that Mesut Ozil had agreed a new deal at Arsenal.

Try as I might, I couldn’t find the alleged piece from the Sunday Express that was quoted as a source by the likes of the Mirror, Daily Star and Metro (as well as sites in Italy and Portugal). None of those sites link to the piece they claim their post is based on, making me think they’ve just based it on the other reports they read on other sites. 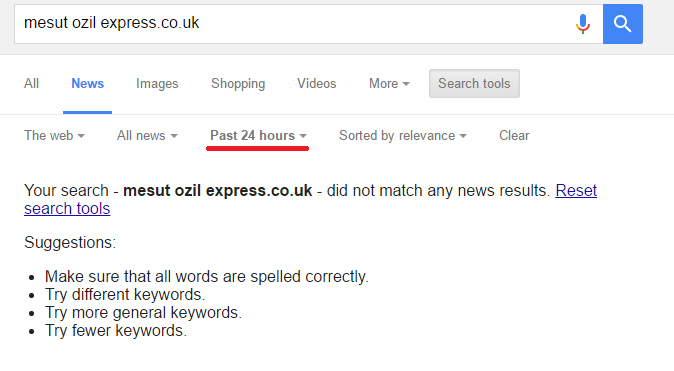 Anyway, the whole point is that none of this should be of any concern to Arsenal fans.