Liverpool still sit on top of this season’s Premier League Injury League table, but West Ham and Hull are closing in on them fast.

Arsenal, so often right up top, are in fifth place which is relatively good for a side plagued by injuries, while Manchester United and Tottenham, who could both say the same, are in 17th and 16th place respectively, an unreal turnaround in their injury fortunes compared to recent seasons.

Swansea City prop up the table with just six points, showing the healthiest squad of the season so far.

At the top, Hull closed the gap on Liverpool after the Anfield side’s treatment room emptied of all but two players this week.

Arsenal’s opponents this weekend, Chelsea, sit in 12th place with less than 50% of Arsenal’s total, a common theme as they continue to employ players made of rock.

Leicester are not faring quite as well as they did last season – something that undoubtedly contributed to their amazing title run. They are in 15th place with 16 points. 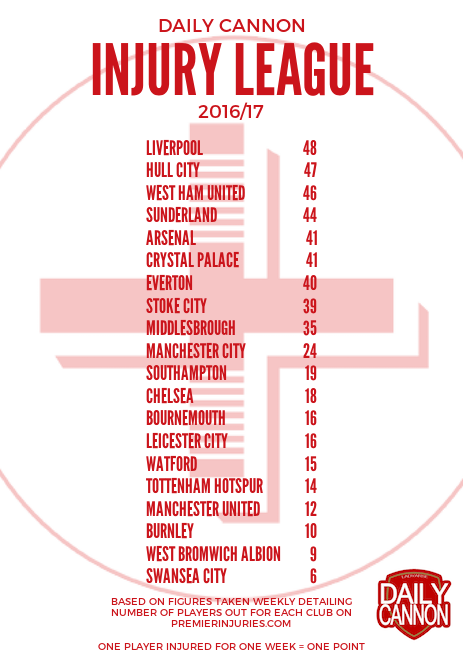