Arsenal were bumped down to fourth spot in this week’s Premier League Injury League courtesy of West Ham picking up another two injured players.

This increased the Hammer’s points total to 19, moving Arsenal to fifth in this week’s Injury League and improving their odds for this week’s games on Matchbook.com.

Carroll will be out for 4-6 weeks with yet another knee injury for West Ham. Payet has some muscle tightness and is expected to have a late fitness test prior to Thursday’s Europa League match at home with Astra Giurgiu.

Also out for West Ham are Andre Ayew and Sofiane Feghouli, both with thigh injuries.

Arsenal currently have a points total of 18, placing them in 5th spot in this week’s Injury League and while it seems to all us Arsenal fans that we aren’t getting any better at preventing injuries, others might be helping us out by getting worse at it themselves.

Welbeck and Mertesacker probably wont return until after the start of the new year. Jenkinson and Gabriel are expected back with November and mid-October returns, respectively.

Ramsey and Iwobi are currently expected to return on 10 September from the injuries sustained during the season opener with Liverpool, who have led the Injury League since the beginning of the season.

Arsenal will be hopeful that they can head into their game this weekend against Watford with no new names added to their treatment room as they look to get their first win of the season in what must surely be their easiest game of this young campaign. Fail to do so and not even a treatment room packed like sardines will give the boss any room for excuses. 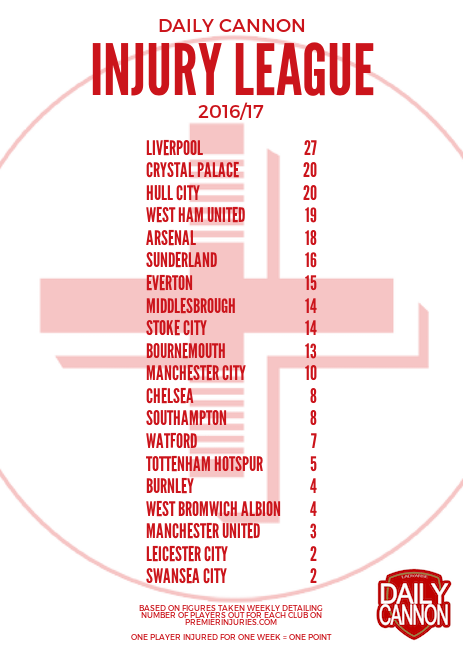 With Arsenal still in the midst of a centre back crisis, speaking to Arsenal player, youngster Krystian Bielik has been talking about how he is being moulded into a one for the club, perhaps due to the price of the limited players available on the market, or maybe just because Wenger has identified him as a player naturally suited to that role.

“Last season, I remember coming to the under-21s, and [Arsène Wenger] told me that from today I would start training as a centre back.

“They decided they wanted to try me at centre back, and I started training there. After the first game we played really good, and I felt it was alright. When Arsenal changed my position, I wasn’t very happy because it wasn’t what I loved in football. From a midfielder to a centre back, it was a big difference for me.

“Now I feel much better, and I feel I can be a really good centre back.

The Injury League is updated each Wednesday with injuries reported by Premier Injuries, and can only be found here, on Daily Cannon.

Arsenal 21yo returns to the pitch days after hospital visit

William Saliba named among L’Equipe’s ‘flops’ of the week

2 Arsenal players make Team of the Week after Spurs win

Arsenal confirm surgery success: Player will be out for 6 weeks