In fact, Arsene Wenger cannot fail again next season. We’ve been on the verge of something special for far too long and most supporters are sick of waiting. The Premier League title has eluded us for 12 years and counting, and Wenger’s incompetence in last summer’s transfer window cost us dearly whilst 5,000-1 underdogs Leicester City shocked the footballing world to win the title. 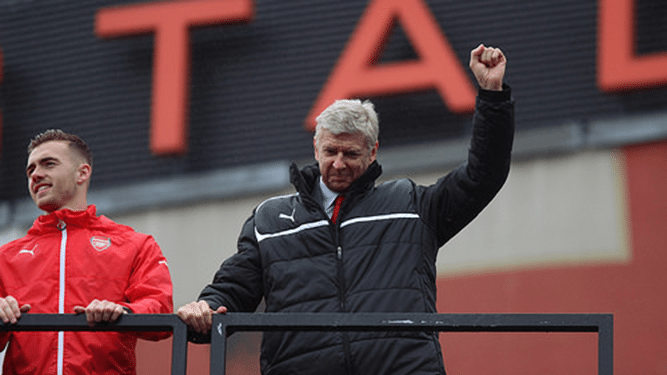 While Leicester’s success was an anomaly, Arsenal’s struggle to maintain a title challenge is most certainly not. If truth be told, the Gunners should have won the English crown on at least two separate occasions throughout the last decade but we’ve slipped up at the vital moment. Whether those failures have been Wenger’s fault or down to injuries or circumstances is up for discussion but the Frenchman’s transfer dealings haven’t helped matters to say the least.

As of July 12, 32Red UK are offering 6/1 on the Gunners to finally get their hands back on the Premier League crown next season. Right now, Arsenal have laid the foundations but they are still lacking a bit of flair, especially in the final third. We are looking very strong on paper but goals may still come at a premium; particularly if Wenger doesn’t sign another striker this summer. Olivier Giroud simply isn’t good enough to perform week in, week out.

But let’s be honest, Giroud hasn’t been good enough for years and the Arsenal boss has refused to act. Wenger’s affinity for Giroud is – and always has been – crystal clear. He rates the French player a lot more than most Arsenal supporters do. As shown at this summer’s European Championships, the 29-year-old is capable of scoring goals and leading the line but he needs support; he works much better with a strike partner upfront.

And this is where Arsenal fans can start to dream. In a perfect world, Wenger would break the bank in an attempt to sign Atletico Madrid’s Antoine Griezmann. The French star has a strong working relationship with Giroud and their rapport from the international side could give Arsenal an edge in attack. On his day, Griezmann rivals the likes of Neymar and Gareth Bale as the third best player on the planet – THAT’S how good he really is.

But Arsenal also need cover and quality at the back. They have long been linked with a move for Wolfsburg left-back Ricardo Rodriguez and he would be a fantastic addition to our young defensive unit. The 23-year-old performed admirably for Switzerland at Euro 2016 this summer and he is also lethal from set pieces. If nothing else, Rodriguez could be a long-term investment and Wenger shouldn’t hold back; especially with additional revenue from the new TV deal.

If the Gunners are genuinely going to challenge for the crown next season, they have to improve defensively. Traditionally, Arsenal have leaked goals at the back but this is a new era of football. It is now imperative to keep clean sheets – especially in the Premier League – and Wenger has to adapt or the Gunners will be cast away.

England’s top flight is now more competitive than ever before and you could argue that there are perhaps six or seven teams that could win the title next season. Arsenal will be up there, Manchester United and Chelsea will both improve and so will Jurgen Klopp’s Liverpool. In fact, the Gunners – priced at 8/1 with 32Red and NetBet – may need to secure the FA Cup to keep supporters onside.

40 days til the new @PremierLeague season starts. Will probably be the most competitive it’s ever been; almost every club looking dangerous!

Ultimately, our fate lies in Wenger’s hands and his ability to act effectively in the summer transfer window. Arsenal have been in the doldrums of English football for far too long and back-to-back FA Cup victories only helped to mask the evident problems at the Emirates Stadium. Should Wenger fail again, it could be signal the end of his Arsenal career. He’s been an excellent and loyal manager but it might be time to move on and part ways on good terms…

Is it time for Emi Martinez to shut up about Arsenal?

Exotic imports: 4 players from underrepresented countries to have played for Arsenal