One of the most exciting things about this year’s Euros is watching Granit Xhaka knowing that he’s an Arsenal player.

We don’t often get to watch players in competitive matches knowing that they will be playing for us next season, so as he impresses all around, it gives you a nice warm fuzzy feeling inside.

Speaking after the 1-0 win over Albania, former Arsenal man Johan Djourou has said that Xhaka will do just fine at Arsenal and from what we’ve seen so far, we’d have to agree.

“I think he won’t have a problem,” Djoruou told ESPN FC. “He’s a top-class player with lots of qualities. I think he’ll do Arsenal a lot of good.

“It’s a team with a lot of talent and a lot of class. There’s people like [Francis] Coquelin and [Santi] Cazorla – there’s huge competition – but I’m sure that he has the quality to impose himself.

“He brings calmness, his ability to play long passes, precision and aggression.”

Djourou also spoke about what it must have been like for Granit to face his brother, Taulant, the first time such a thing has ever happened at the Euros.

“It’s clear that in terms of emotions it mustn’t have been very easy,” Djourou continued.

“Being brothers, you know each other’s weaknesses and strengths so I think it was a very special moment for both of them.

“He managed the pressure well and he managed his emotions. But that’s important. That’s what you ask a young player like that, to be able to keep his nerve and to bring his talent to the team.”

In case you missed it, Granit also revealed recently that both he and his brother still give 80% of their wages to their parents.

How can you not love him already?

Watch Xhaka’s personal highlights from Switzerland’s first ever opening game win at the tournament and read his Player Focus here. 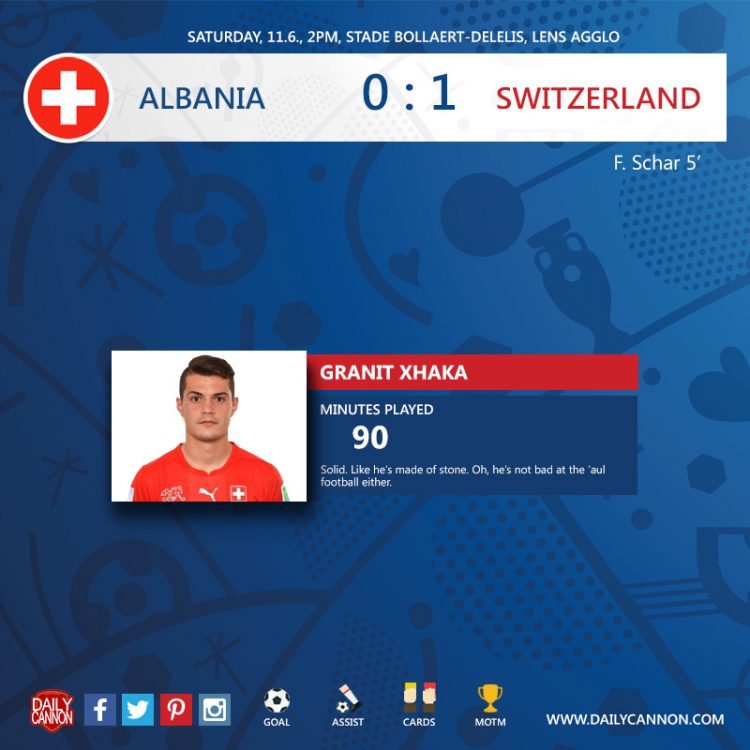 1 out, 6 could return: Arsenal team news for Liverpool clash