The Centre Of Excellence u17 team led by John Bayer beat Manchester United u17 on Saturday to retain the FA Girls Youth Cup.

They also completed the double in consecutive seasons and are now looking to complete another unbeaten season when they finish the League program away against Brighton.

The u17 easily won 5-1 having dominated the first half comfortably before United put a good fight in the second half. Goals were scored by Lauren James, Anna Patten, Jess N’Gunga in the first half. Tinaya Alexander scored the fourth early in the second half and Levi Rathbrun scored a long range free-kick for United before the Arsenal captain Laura Hooper closed the scoring with the team’s fifth of the day.

It was actually a ‘double’ double for eight players, who also did the double last season in their first year as u17 players : Anna Patten, Laura Hooper, Lotte Wubben-Moy, Anna Filbey, Holly Greenwood, Tinaya Alexander, Taylor Hinds and Emma Kelly. 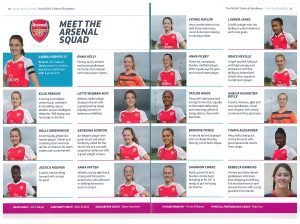