Do you have to be a sadomasochist to support Arsenal? Read on to find out.

During the 85th minute of the game against Leicester City last week, myself and a couple of fellow Arsenal-supporting friends were in the middle of a discussion.

That discussion started from a question that I had posed a few minutes previously, and I doubt I was alone in asking;

Exactly which minor organ would you sacrifice in order to guarantee an Arsenal victory here?

I, personally, was fully contemplating life with only one kidney, whilst my buddies were extolling the virtues of living without a spleen. Like, who needs a spleen, right?

These were the thoughts running through our heads, as those heads lay in our hands whilst Leicester continued to defy all of Arsenal’s attacks.

We were scared, and not just any sort of scared either.

We had that sinking feeling in our stomachs that usually only comes when you get your head stuck inside a small opening, or when you look at your bank account and far more direct debits have been withdrawn than you had realised.

We were petrified, paralysed and helpless to do anything other than look at what was unfolding in front of us, and hope that somehow, even in the 95th minute, that Arsenal would score.

And then Arsenal scored.

There is no one word that can describe the reaction of Arsenal fans after Danny Welbeck introduced us to the concept of ‘Fergie Time’.

It wasn’t only joy, nor elation, nor relief, but an amalgamation of all of those.

We were glad that we had won, not because it won us a trophy, but because it meant that there still was a chance we might win one. All winning against Leicester did was keep our hopes alive.

We can all complain about the financial cost of supporting our football club until the end of time, but as long as watching Arsenal can fill you with nervous panic in the same way that asking someone who you fancy like hell out on a date, and then either smash your heart into pieces as if your crush said no, or engulf your soul with glee if they say yes, then we will pay up every time.

But if there was one thing that made the victory over Leicester seem more important than most, then it was the feeling this season isn’t like many other seasons.

Even now, whilst sitting third in the league, most analysts and pundits agree that if Arsenal play to their potential, they will win the league. Even with tricky games at the Etihad Stadium and White Hart Lane to come, they don’t feel like impossible games to win in the same way that games against the top four clubs have felt in previous years.

This wasn’t just Arsenal keeping a slim chance of a league title alive, this was Arsenal remaining favourites to win. This was Arsenal not screwing things up in the most screwy way possible. In essence, we were celebrating the fact that there will be a good chance of having to go through the same nightmare journey of fear and trepidation in a couple of weeks.

It is pure sadomasochism, Arsenal are the whip, and we keep coming back for more. The only thing missing is a snooker ball. 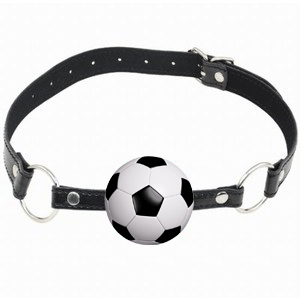 Luckily for us, the opportunities to find one are about to come thick and fast.

Hull City at home should be comfortable enough, what with the Championship side more concerned with trying to become a Premier League side again and thus unwilling to play a full strength side.

The next seven games include a trip to Old Trafford, a trip to White Hart Lane, a potential FA Cup Quarter Final and two games against a Barcelona side in the midst of the longest unbeaten run in the team’s history.

Is the prospect of an unholy whipping against the best team in world football enough to make us *not* watch the game? Of course not.

We’ll still turn up, sing our arses off, and dare to dream that maybe, just maybe, we can get a result against Messi, Neymar, Suarez and co. We just can’t help ourselves.

We are all fully expecting to be kicked square in the perineum, and we’ll be like Oliver Twist asking for more when it’s over.

No matter what the result against Barcelona, we’ll go from there into the Manchester United game full of fear, even though they have a injury list as long as the list of reasons to hate Piers Morgan is.

It should be the other way around, we should be fearing Barca and hoping to thrash Manchester United, but only one game truly matters to us at the moment, and it’s not the midweek one.

We’re about to embark on a four-week run that will be full of dread, misery, contempt, dismay, and every other emotion that makes us feel like the lowest form of intelligent life on the planet. (No, not like Spurs fans. I said ‘intelligent’ life.)

Yet we wouldn’t have it any other way. We want to be hurt, to be brought to our lowest low, to be made fear our very existence.

Misery loves company, and when it comes to Arsenal, we are all loyal followers of pain.

Long may it last.