During the week, Deloitte released its yearly ‘Money League’ table, ranking all football clubs by their turnover during the year.

You can see the full report here, but the important bits are below: 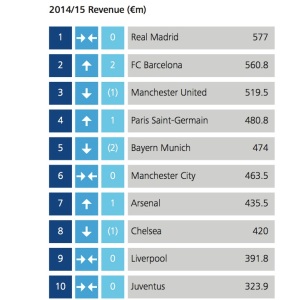 Oops. Seriously though, look at the first 10 teams on that list. There are four there that either have a huge commercial advantage over everyone else (Manchester United and Bayern Munich are head and shoulders above everyone else in their ability to milk businesses for every penny possible) or have TV deals that are heavily skewed in their favour compared to the rest of their domestic league (Real Madrid and Barcelona would lose around £50m a year in revenue if TV money was distributed equally amongst La Liga clubs in the same way it is in England).

Then there are three clubs who have had their coffers stuffed to the brim with by either loans from a billionaire owner who has no intention of seeking repayment on them (Chelsea) or sponsorship deals from companies that are owned by the same person who owns the football club (Manchester City and Paris Saint-Germain).

As you can see, there are three distinct tiers amongst the highest earners in world football. If you’re in one of those tiers, you’re pretty much guaranteed to be at least in contention for silverware, and if results don’t go your way, then you’ve got the option of spending your way out of trouble. But if you’re not in one of those tiers, then it just gets that little bit harder to close the gap on those ahead of you.

Arsenal are one of the lucky ones, they are in that small group of clubs that have the financial advantage over everyone else. But it’s not the position on Deloitte’s list that should concern Arsenal fans, it’s the gap between the top 10 and the rest that is extremely worrisome. Just look at these numbers to see how:

For those of you unsure of the exchange rate between pound sterling and euros, let me put it this way: Arsenal paid Real Madrid €50m for Mesut Özil, and are paying him €10m per year in wages. That doesn’t even constitute A QUARTER of the difference in money between Arsenal and a club of the stature of Inter f’ing Milan! And this difference isn’t a one-off, it’s cumulative. As another season passes, the gap will only continue to grow.

Now, as much as this might seem like a good thing, that a handful of clubs are separating themselves from everyone else and that Arsenal are keeping up with them, the reality is that nothing could be further from the truth. The fewer clubs there are that can compete for the likes of the Premier League or the Champions League, the better those clubs will become and therefore be harder to beat.

Arsenal need more teams to rival them, not less.

Even though Arsenal have the seventh highest turnover in the world, it’s still €100m+ less per year than Real Madrid and Barcelona. We have the ability to outspend just about anyone in the world, except for the clubs that are our direct rivals. It’s all well and good being able to beat Liverpool to the signing of Alexis Sanchez, but when Barcelona are able to add Luis Suarez to a front line that has Lionel Messi and Neymar in it, one Alexis isn’t enough to bridge the gap. We’re stretching the gap between us and everyone behind us, but the biggest clubs are also stretching the gap between them and us.

If this trend continues, then Arsenal will be left with two options: either the owner puts his own money into the club to make up the shortfall (LOL!) or fans will once again be asked to dig their hands into their pockets as deep as possible and help fix a problem that they had no hand in creating in the first place. Guess which one will happen?

As long as competitions allow teams to have massive financial advantages like they do at the moment, then Arsenal will be in the small group of teams that will consistently be in contention for trophies. But in that small group, Arsenal will also be one of the lesser off teams, thus being disadvantaged themselves. And if having a €430m turnover means being at a disadvantage, then football is in a seriously unhealthy state.

It is indeed rich for some, but those some are becoming fewer and fewer by the year.

Episode 275: Is it time to fire up the Arteta Out bandwagon?