When Calum Chambers’ £16m transfer to Arsenal was complete, the deal was met by both uncertainty and optimism about the youngster’s future.

Uncertainty because many supporters were unsure as to whether Chambers would settle into the first-team, and actually prove his worth in the side. But also optimism: Chambers has plenty of international experience with England, reiterated by the amount of international caps he’s tallied in the youth ranks (32 and counting).

A 20-year-old from Southampton’s academy system, with the fee and terms of the deal being taken into consideration, it was definitely more of a long-term investment as opposed to a quick ‘big name’ fix.

Those fans who were worried that Chambers might not be good enough were effectively silenced in the early months of the campaign. His impressive displays in the annual Emirates Cup tournament, as well as when called upon in the starting XI, demonstrated how a run of good form and consistency can see you force your way into Arsène Wenger’s immediate first-team plans.

Then, questions arose as to whether he would be suffering from possible burnout, as a result of playing too regularly with limited recovery time between matches. Add a senior England international call-up to the mix, and critics began to rumble.

Playing against Norway (a cameo), San Marino and Estonia is sure to have given Calum some insight into how he’s improved on the international stage, but it’s clear that he’s eager to continue developing with regular game time under his belt.

Originally a right-back, it soon became apparent that both his height and physique were more suited to a centre-back role – where he can play, but didn’t have much experience in doing so.

Héctor Bellerín established himself as our first-choice right-back last season, while the partnership of Laurent Koscielny and Per Mertesacker in the heart of defence ensured Chambers was sparingly used for the second half of last season.

Since then, though, he has been experimenting with different roles and utilised in various positions to try and see whether he could adapt enough to play there on a regular basis.

His baptism of fire came in the goalless draw against Liverpool, when the possibility of a future centre-back pairing alongside Gabriel was tested by the likes of Philippe Coutinho and Christian Benteke. A hard-fought clean sheet, courtesy of some excellent saves made by Petr Čech, was a much-needed morale boost.

He’s also shown the capability to play in a defensive-minded midfield role, similar to the one which has been so successful with Francis Coquelin over the past year. As a firm believer that Santi Cazorla is still better suited to a more attacking position, it gives the Spaniard the flexibility to get forward more often – once he returns from his knee injury.

That is the same belief echoed with Aaron Ramsey, who has played in different roles to accommodate other players, but not always particularly himself. On the right-wing, he offers defensive support off-the-ball, but in a more central role, he’s given the freedom to play forward and join counter-attacks to try and create a goal-scoring chance for himself or a teammate in space. 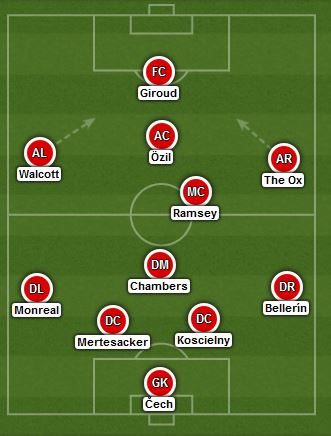 Chambers was one of Arsenal’s best performers against Bournemouth last week, but his individual display slipped under the radar.

In a midfield pairing with Ramsey, he didn’t look out of place or disorganised, and was assured in possession – something that has been rare to see when Mathieu Flamini has been involved this term. The Frenchman often tries too hard to force tackles or mistakes from opposition players, which results in himself giving away needless fouls or picking up yellow cards.

That’s why a few eyebrows were raised when Flamini was selected to start against Newcastle. Once again showing that his erratic decision making does hurt the team, he flew into challenges without winning the ball and gave away a number of free-kicks.

Chambers’ successful performance against Bournemouth was similar to the roles that both Chelsea’s Nemanja Matic and Manchester City midfielder Fernandinho have completed with efficiency over the past two seasons in the Premier League.

Protecting the backline is an effective method of reducing collective pressure off-the-ball because it allows the more attack-minded players the freedom to get forward without having to constantly defend, but means they are still able to track back when out of possession.

Before the game against Eddie Howe’s side, Calum had only completed 90 minutes once in the league this season, the aforementioned game against Liverpool. His eagerness to continue developing at a high level was reiterated by his openness to play for the u21s – to keep match sharpness.

Playing in a midfield role against Brighton at the end of November, he earned praise from Steve Gatting.

“The boss has seen him play several positions and it is handy for the first team to have a player like Calum. He can perhaps play in central defence, at right back and in midfield and he gives the boss options and that is good for Calum to play in different options.”

You expect that if he’s given a solid run of first-team football, Calum will grab the opportunity with both hands. That way, the players still to return from injuries will have a task on their hands to get themselves back in the side.