The closest thing we have to Zinedine Zidane.

These are just some of the words and phrases used to describe the incomparable Mesut Ozil. Since his £42.5m move from Real Madrid, Ozil has dazzled Arsenal fans with his flicks, tricks, deft touches and passes that betray the laws of physics and force you to reach for the rewind button.

And while his move was met with radiant optimism, and even some acknowledgment that Arsene Wenger had truly kept his powder dry for the perfect signing, Ozil received more criticism than plaudits during his first two seasons in the iconic red and white. Pundits called him anonymous, fans asked what he truly offered and some even had the gall to question his commitment by citing how much ground he covered over the course of a game.

And yet, in his debut season he was 4th in Key Passes per-90 minutes in the Premier League… 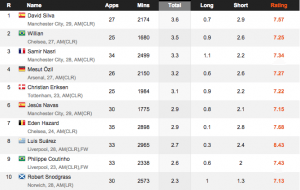 And in his second season he was 1st… 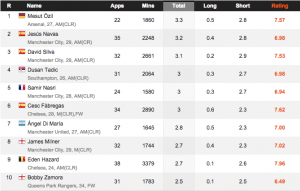 And so far this season, he leads all of Europe in Key Passes and Assists (amongst qualified players, so, no, Alexandru Maxim and Gerard Deulofeu do not count). 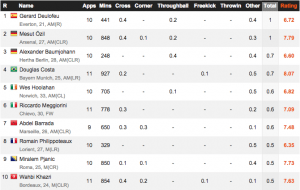 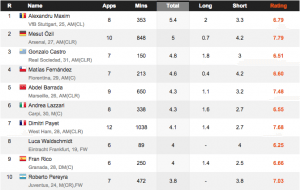 Credit: Whoscored.com (If images are blurry, click on them to open in a new tab with refined definition)

Ozil’s importance to Arsenal, and indeed their legitimate title-challenge, can no longer be debated. Of course, the most observant could always appreciate how his movement opened up space for others, his ability to bend defenses by recycling possession on the edge of the box and why his very presence effected defenses. His contributions were there to see, and eminently measurable, but it was easier for the narrative to marry his lack of flashy goals to Arsenal’s uneven form.

In 848 minutes of action (the equivalent of 9.42 full games), so far this Premier League season, Ozil is creating almost five key passes per-90 minutes and has doled out nine assists, more than one per-90 minutes. To contextualize this, let’s revisit some of the notable assisting seasons in recent memory (all league-only):

So, yeah, none of the best seasons from the likes of De Bruyne, Lampard, Ribery, Fabregas or Payet can even come close to the rate that Ozil is assisting goals. We have two more players to look at, though:

That’s right, even at his best for Real Madrid (feeding the likes of Cristiano Ronaldo, Angel Di Maria, Gonzalo Higuain and Karim Benzema), Ozil has never been in this sort of form. Which is somewhat insane because, according to Michael Caley, Barcelona and Real Madrid are ‘super teams’ that can sustain very high conversion percentages thanks to the amount of star-power they possess.

So, what does that say about what Ozil is currently doing?  Well, firstly, it’s almost certainly unsustainable. 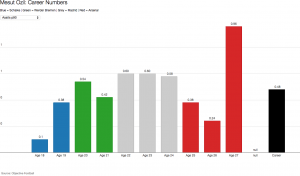 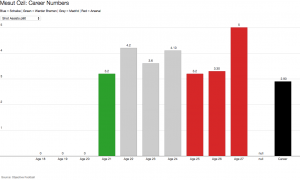 Indeed, Ozil’s creating chances and assisting goals at rates that are far above anything he’s done in his, already illustrious, career to-date. Say what you will about Ozil finally enjoying a full pre-season and striking up a powerful relationship with the prolific Olivier Giroud, it would be ridiculous to suggest that Ozil keeps this up and has 30+ assists this season. Will he threaten Thierry Henry’s record of 20 assists in a season? Almost certainly, but there’s no precedence for a player to up his career rate of assists by 40% in one fellow swoop. He is enjoying the purplest of patches right now, and it’s quite enjoyable, but at some point his passes will stop being so menacingly picturesque:

Which, contrary to what you might thing, isn’t such a bad thing. Even if his assists drop off, it doesn’t mean doom and gloom for the entire team. Arsenal, if anything, are only scoring at a ratio of 1:1 in regards to their Expected Goals (courtesy of data provided by Paul Riley and Michael Caley). They’ve met goalscoring expectations after a cold start to the season, and Ozil is a large part of that, but as his assists slowly decline you can expect the likes of Santi Cazorla, Alexis Sanchez, Theo Walcott and Aaron Ramsey to pick up the slack. That’s just the dynamic of the team.

But, of course, everything is relative. Even if Ozil slows down by 30%, he is still on-pace to smash records for assists and chances created. So say what you will about his price tag, his physique, willingness to fight for the club or any other cliched attempt to undermine him, just know that Ozil is smashing records and charging Arsenal to a real title-challenge.