Another game against Mauricio Pochettino, another struggle.

“The battlefield is a scene of constant chaos. The winner will be the one who controls that chaos, both his own and the enemies.” – Napoleon Bonaparte.

In the build up to the game I wrote a short piece about Pochettino’s impressive record against Arsène Wenger, and that has continued into their fifth meeting on Sunday afternoon. The Argentine likes his sides to adopt a style of football which Arsenal – particularly this Arsenal – are struggling to deal with.

When Arsenal are pressed in the middle against a team managing the space around them, it doesn’t tend to end very well. The thing is, Arsenal don’t control games with the ball anymore. Recent wins against Manchester United, Watford, Everton and Swansea City saw goals come in quick flurries from intense attacking moves or set pieces rather than a considered approach from deep.

Sunday saw the same, but it cost the Gunners. Arsenal created just 10 chances on Sunday, with almost every single one coming from a cross.

@MananAgrawal1 each shape is an attack that led to a shot. They show the outer bounds of the move, and colour is duration.

Unlike Tottenham, and unlike what we’re used to, Arsenal rarely built an attack from deep as they allowed themselves to be dragged into the chaos of Spurs’ pressing game. Pochettino gave his side the upper hand for the first hour (at least) as Arsenal were stuck in the middle of what represented a pinball tournament better than a high quality game of football. Unlike Manchester United, Spurs managed to control our chaos and we almost paid the ultimate price.

So why are Arsenal playing like this now? We became incredibly used to possession football, control rather than chaos, so what’s changed? It simply suits the current players more. Unfortunately, though, there doesn’t seem to be a specific plan. We don’t play long ball, nor do we press or force many errors. In a defensive shape we’re often sitting deep, not putting huge pressure on the ball and not causing any chaos.

But apparently we don’t really control either.

Arsenal have conceded more shots on target this season in the Premier League (50) than newly promoted sides Bournemouth (48) and Watford (46). Something is clearly very wrong.

If anything any chaos off the ball is nothing but negative as far as we’re concerned, as we make mistakes rather than forcing them from the opposition. Our chaos comes from our play on the ball, making us unpredictable on the front foot but attacks are also ill thought out.

Our chaos is supposed to be created by movement off the ball but that’s a huge problem right now without Theo Walcott, Danny Welbeck and Aaron Ramsey (whose movement off the ball is superb). Not only does Ramsey make great runs in the final third, but he becomes a third central midfielder so Arsenal can control the centre of the park. Without him, they’ve badly failed to do that against both Swansea and Tottenham. Without any of those players, our chaos is incredibly controlled.

The alternative is to control the game. We can’t do that with out defensive shape, and we aren’t chaotic enough to threaten defences right now. A possession game is needed to control the match but with Santi Cazorla and Francis Coquelin in midfield, that isn’t happening.

It isn’t a matter of technical ability, but the Arsenal midfielders are not in the right shapes to dictate play. With Alexis Sánchez, Mesut Özil and Nacho Monreal on Sunday it wasn’t as easy, but we usually also have Aaron Ramsey and Héctor Bellerín in the side. There are a lot of high quality players who always want the ball, but the Gunners rarely find them as much as they can from the back.

The Squawka Comparison Matrix tool is often maligned, and I totally get why. Stats are useless without context and analysis, but reveal the game to us when you do actually apply information. Spot what’s different from Arsenal’s current deepest midfielder right now and other top teams who try to play from the back. 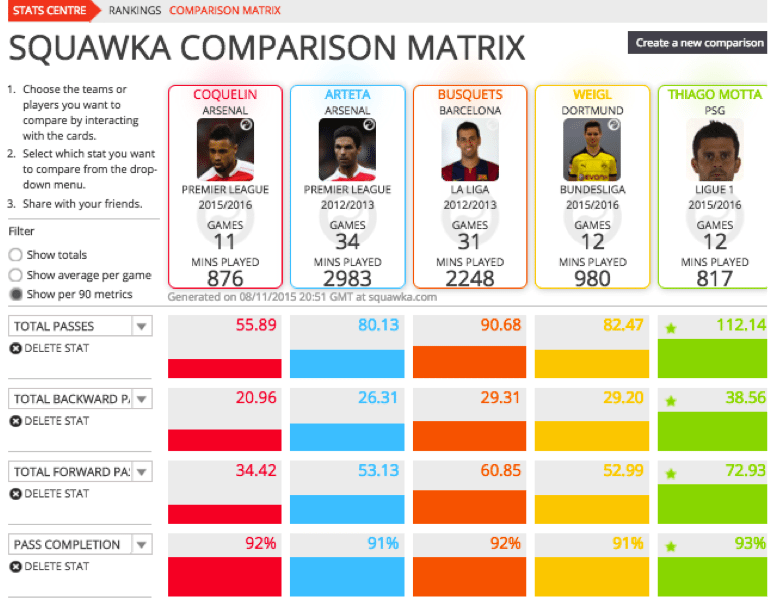 First things first: Francis Coquelin’s pass completion is good. There’s evidence of that right there. The problem is, the passes aren’t getting Arsenal anywhere. Completing a lot of passes doesn’t make you good at passing, it makes you good at completing the passes you choose to play. Coquelin chooses to play passes that don’t advance Arsenal.

Mikel Arteta is often criticised for not passing forwards enough, but his 2012/13 season saw him play 66.3% of his passes forwards and 32.8% backwards. This season, Coquelin is playing 25 fewer passes per 90 minutes and 37.5% of his passes are going backwards. Arsenal’s deepest midfielder is only playing 34 non-backward passes per game. That clearly is not enough.

Santi Cazorla (80 passes per game) bears the brunt of plenty of the creating from deep at Arsenal, but Marco Verratti has a similar role at PSG and is playing 116 passes per game alongside the incredibly high numbers of Thiago Motta.

Sergio Busquets is simply put the world’s finest, the benchmark for setting up play from deep. At Borussia Dortmund this season, Julian Weigl is doing much the same alongside Ilkay Gündogan as the main playmaker.

At Arsenal Santi Cazorla is the Verratti, the Gündogan. Unfortunately, he is also trying to be the Motta or the Weigl. Arteta was that (with Alex Song, then Jack Wilshere and finally Aaron Ramsey regularly alongside him) but can’t play regularly anymore.

There seems to be two solutions at this point. Arsène Wenger needs to decide on either control or chaos. With the former, a new midfield needs to be found. The latter, Arsenal need to learn how to press from the front.

Francis Coquelin is perfect to be something of a midfield sweeper in a high pressing tactic, he judges space well and pounces on the ball quickly before bouncing it into the feet of a more attack-minded player. Unfortunately, he doesn’t have the ability to gradually and calmly play the ball from deep.

Neither may happen just yet, especially with the transfer window closed, but eventually the choice between chaotically winning or controlling the game has to be made.