August 8th is right there, people.

The start of the Premier League season has many a fan salivating after what feels like an eternity without proper club football, but the wait is nearly over. Unfortunately, we are still in the midst of the silly season, so the early fixtures will have the heavy cloud of the transfer rumour mill hanging over it. For some, that’s a good thing (like those that insist on tweeting Kike Marin questions about Karim Benzema).

Certain people will see this as an opportunity for Arsene Wenger to properly assess the squad against the likes of Chelsea, West Ham, Crystal Palace, Liverpool and Newcastle United before deciding whether the squad is truly ready to challenge for the title. Others are already convinced the squad requires one, if not two major signings to truly rub elbows with Manchester City, Manchester United and Chelsea.

Lost amidst the constant “reports” linking Arsenal to Salomon Kalou and Clement Grenier is the need for improvement within the squad. Wenger has long been an advocate of finding solutions within Arsenal’s ranks when many suggested he turn to the market. In a press conference leading up to the 6-1 drubbing over Lyon in the Emirates Cup, Wenger espoused this virtue, specifically calling on the squad to score more goals as a collective — Arsenal only scored 71 in the league last season.

Indeed, since the Invincibles conquered the league in 2003/04, the average Premier League champion has scored 82.73 goals — 71 would have sufficed once, in 2008/09 when Manchester United won the title with only 68 goals (but a sterling defensive record of 24 goals conceded). In fact, the average runner-up in the time span has averaged 78.1 goals. However, this virtue goes beyond just looking for more goals. 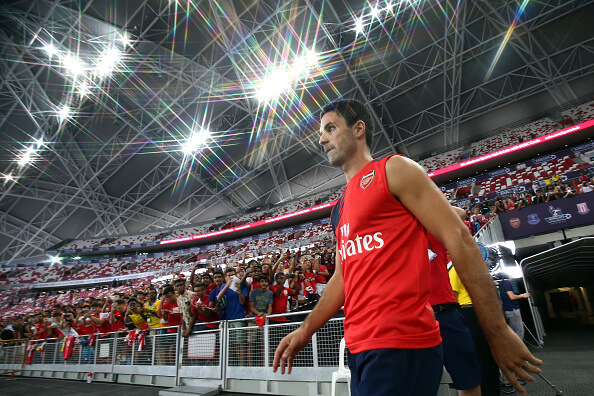 Wenger is right to firstly ask more from the squad before dipping into the market, and one player with the potential to markedly improve the squad is our captain, Mikel Arteta.

Once considered one of the more creative forces in the Premier League, Arteta’s almost exclusively played in a deeper role to complement a more mobile, versatile midfielder (Alex Song, Aaron Ramsey, Jack Wilshere, etc) at Arsenal.

Since the moment he arrived at the Emirates, Arteta has been derided for his supposed inability to thrive as a real defensive midfielder. This particular criticism reared its ugly head again last season when Arteta was sidelined with injury and Arsenal’s uptick in form coincided with Francis Coquelin’s miraculous rise to stardom. And while there were other forces at work (Olivier Giroud, Laurent Koscielny and Mesut Ozil all also returned from injury), there was now actual merit to the idea that Arsenal just needed a steely, rugged bouncer in midfield to allow the artists up front to flourish.

Or is there? Was Coquelin truly that much more productive than Arteta, or were we misled by this convenient piece of #narrative? 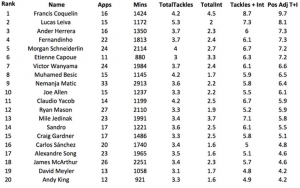 (Apologies for the image being blurry, if you click it a more legible version will open in a new tab)

Last season we saw loads of graphics and statistical comparisons that showed Francis Coquelin was outpacing the starrier likes of Morgan Schneiderlin and Nemanja Matic in terms of tackles and interceptions per-minute, but the above graphic (chronicling the 2014/15 season up until May 10th) gives further context by adjusting for possession.

Why adjust for possession? Well, simply put, you cannot intercept the ball or tackle the opposition when you have the ball (though, I’m sure Joey Barton has tried), so adjusting for possession gives a more accurate snapshot of a player’s defensive prowess.

What does this have to do with Mikel Arteta? As shown in that Statsbomb article, Arteta recorded an absolutely gaudy number of defensive actions, when adjusting for possession.

The column on the left is the number of interceptions+tackles made per-90 minutes, while the column on the right is the possession-adjusted defensive metrics. No, your eyes do not deceive you, Mikel Arteta was the league’s most active player when it came to racking up tackles and interceptions during the 2013/2014 season.

“Isn’t that the season Arsenal lost 5-1 to Liverpool, 6-0 to Chelsea, 6-3 to Manchester City and 3-0 to Everton on the road in the span of four months?” Yes, shut-up, but I’d argue you could have replaced Arteta with Patrick Vieira, let alone Coquelin, and Arsenal would have still comfortably lost each of those matches. Those were team-wide capitulations.

So how do Coquelin and Arteta compare statistically? 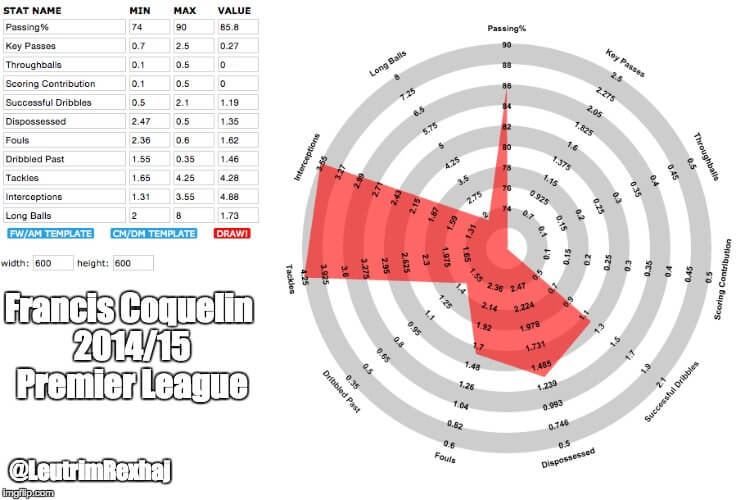 These radars I made debunk the idea that Arteta paled in comparison to Coquelin. Not only was Arteta almost as active as Coquelin on the defensive side of the ball, but we all know just how important his metronomic passing was to Arsenal’s style of play. Add his much-needed knack for never being dispossessed of the ball and that lovely coiffe, and maybe Arsene Wenger is onto something when he preaches looking within the squad for improvements. If you recall, Arsenal’s 3-0 lead over Anderlecht evaporated only after Arteta was subbed off.

An undroppable mainstay in the squad for so long, Arteta only managed a total of 789 minutes lasts season due to injury, a sad reminder that Father Time eventually defeats us all. Now 33, Arteta is at the age where you would expect injuries to become more frequent and his mobility to slowly slip away. Shad Forsythe has worked wonders with the squad, but it’s impossible to know if he can get Arteta back to where he can not only cover, but possibly usurp Coquelin’s place in the starting XI.

With many a Gooner clamoring for Wenger to look to the market for an upgrade at DM (including myself, to an extent), it would seem Arteta’s stock is at an all-time low. With a full preseason behind him and a healthy squad to build with, it is now up to the captain to stake his claim and convince Wenger he can still get it done at the highest level.

Like they say, form is temporary, but class is permanent.