There is no reason to expect a major shake-up despite the loss to West Ham United last week, with much of Wenger’s team picking itself.

No doubt Petr Čech will keep his place in goal, and his defence is likely to look the same as last week with just one change. Héctor Bellerín missed the defeat to West Ham with a thigh strain but is able to come back in, and expected to do so. The Spaniard has overtaken Mathieu Debuchy as Arsenal’s first-choice right-back.

Alongside him it would be a big surprise if Per Mertesacker wasn’t partnering Laurent Koscielny, who will be flanked by Nacho Monreal.

Midfield is where it becomes tricky. Aaron Ramsey, Santi Cazorla and Francis Coquelin only fit into two central spots with Mesut Özil occupying the #10 role. After last weekend, Wenger may revert to the pairing of Coquelin-Cazorla that served him well last season.

With Alex Oxlade-Chamberlain Arsenal’s brightest spark against the Hammers that leaves Aaron Ramsey with no place in the team. Alexis Sánchez is set to return ahead of schedule (possibly to the detriment of his health, but we may unfortunately have to cross out fingers and hope for the best as Wenger seems determined to field the Chilean) and, unless Wenger springs a surprise, will play from the left.

Up front he can choose between the physical Olivier Giroud or pacy Theo Walcott. Last weekend saw Giroud disappoint but he didn’t have anyone running around him, which would change with the inclusion of Alexis. Nonetheless, I feel the manager may just head back to Walcott for this game. 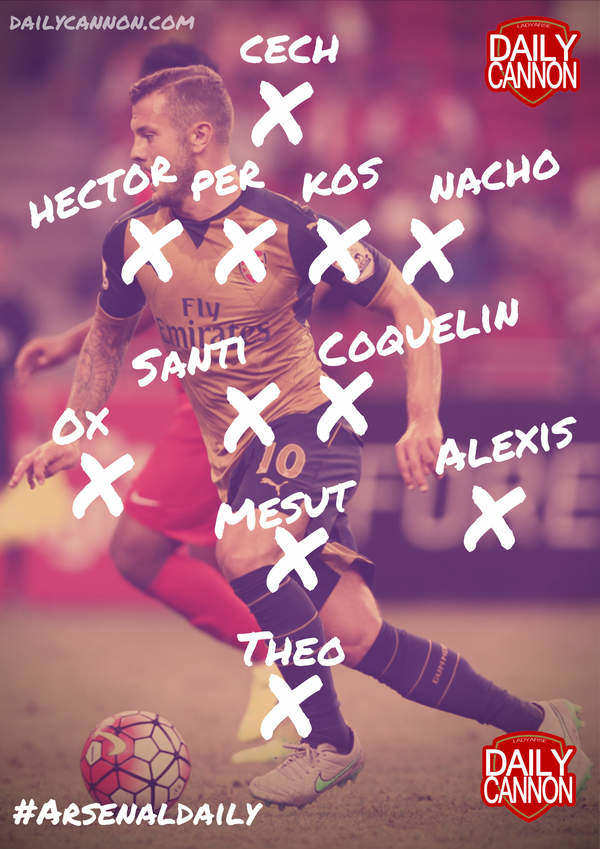