The whole summer has seen Arsène Wenger add just Petr Čech to his first team squad, and the goalkeeper will make his Premier League debut for Arsenal on Sunday.

The Gunners welcome West Ham United to Emirates Stadium for the opening fixture of the season and the manager has a little bit of a headache: who the hell will he pick in front of Čech?

Presumably he will go with the same back four as he used in the Community Shield win over Chelsea last weekend. Héctor Bellerín, Per Mertesacker, Laurent Koscielny and Nacho Monreal have established themselves as Wenger’s first choice defenders.

Now it gets tricky. Centre midfield is Aaron Ramsey’s position, but it is also Santi Cazorla’s and where Francis Coquelin plays. Three doesn’t go into two. Ramsey and Coquelin played together in the Emirates Cup demolition of Lyon and then once more at Wembley last week, so we don’t think Wenger will shake too much up.

That will leave Cazorla on the left flank, coming inside as freely as he likes, with Alex Oxlade-Chamberlain keeping his place on the opposite wing after scoring the only goal last weekend. Mesut Özil will, of course, play in his favoured number 10 role. As he should.

Up front there is another decision to be made.Theo Walcott enjoyed a solid pre-season and started at Wembley last week, but Olivier Giroud has scored five goals in as many games against the Hammers. We think Wenger will opt for our number 12 as a result. 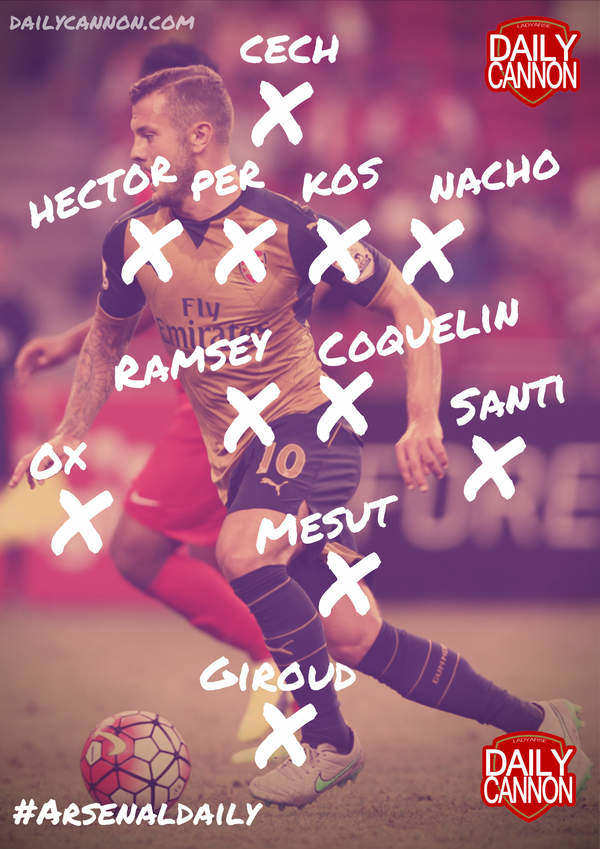