Inevitably over the long summer break, there is only really one topic of conversation available to football fans.

Identifying gaps in the squad and who we should sign to fill them is a conundrum which keeps Gooners worldwide occupied during this most dreary period of the footballing calendar. In Arsenal’s case it’s sometimes hard to detect those gaps because of the blurred lines between positions – has Santi Cazorla permanently converted to a deeper lying role and will Aaron Ramsey continue to ply his trade on the right wing or will space be made for him back in the centre of the field?

Theo Walcott is a classic example of this predicament – is he competing for a place on the right wing with Ramsey and the upcoming challengers Oxlade-Chamberlain and Gnabry, or is he a centre forward rival to Olivier Giroud and, possibly, Danny Welbeck? (Chuba Akpom, hattrick aside, still has much to prove before he can be taken seriously as a pretender to the striking throne.)

Where Arsene Wenger sees our contract rebel playing come August affects where the gaps in our squad lie, and consequently the areas of the team where we most need to strengthen. With Sanogo off on another season long loan, if Theo is to again get chalk on his boots then a striker is surely a critical addition given Welbeck also plays out wide as frequently as he does centrally.

If we look at Walcott’s greatest strengths – speed, composure and deadly finishing – all three are hallmarks of a top striker. He also has a measure of selfishness to match almost all the best forwards in the game. I’ve heard a lot of talk about how Theo is poor in front of goal, rushing and scuffing his efforts of skying them far over the bar. That was certainly true of the 2006 version of Theo Walcott, but over time he has markedly improved that side of his game. A certain Thierry Henry didn’t exactly set the world on fire in his early time at Arsenal either.

I made the bold statement earlier this summer that Theo is better in front of goal than the much adored Alexis Sanchez, and the stats bear me out. In the Premier League last year, Walcott averaged almost exactly a goal for each 90 minutes on the pitch*, while Alexis was down at 0.4 goals per 90. Likewise, the Englishman came out on top in terms of shot accuracy (75% compared to 62%) and chance conversion (22% compared to 13%). 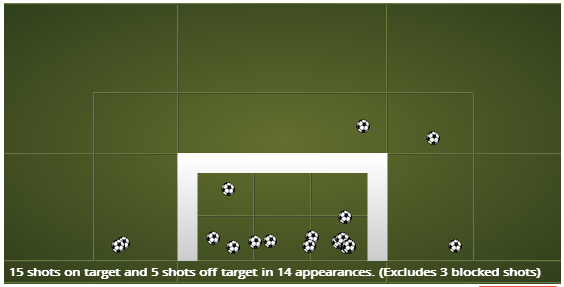 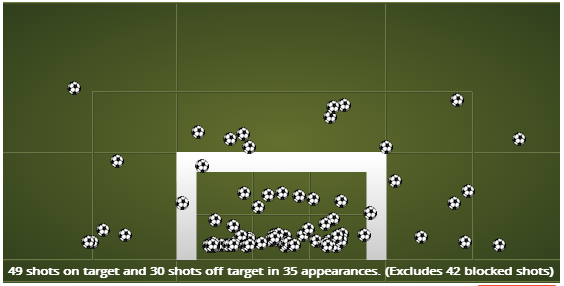 Those numbers are in no small part down to the locations from which each chooses to take on shots. All of Theo’s goals came from inside the area, compared to 81% of Alexis’, and inevitably shots inside the area have a greater chance of going in. Walcott takes just 9% of his shots from outside the area compared to 44% for his Chilean counterpart, making him a more effective finisher.

So then, the age old cliché around who you would want on the end of a chance may have a different answer to the one you would expect. Walcott has a poacher’s instinct in front of goal, and

So far all that then, presumably he’s vying for a place in the position he apparently so craves: centre forward. Not necessarily.

It takes a special kind of player to be effective playing alone through the middle, as Harry Kane found out to his cost in the latter half of last season. If you’re isolated up top, it’s fairly simple for a pair of centre backs to mark a solitary forward out of the game, particularly one reliant on others for service, such as Kane and Walcott.

In a side as populated by small, technical players as Arsenal, there’s also no denying the value of the skills brought to the team by a player like Olivier Giroud at both ends of the pitch, qualities Walcott can never hope to match such as height, strength and sheer bulk.

By playing on the wing to a striker as willing to run the channels as Giroud, Theo not only avoids such issues, but he also benefits from the element of surprise. When you play centre forward, the centre backs look for you and keep tabs on where you are at any given moment. When you play on the wing and cut in, you can often catch them unawares, particularly if the fullback is less than attentive.

Add in the flexibility of another right footed player on the left wing in Alexis Sanchez, and the interchange between the front three can have opposition defences chasing their tails. The most recent example of that would be the way Walcott’s opening goal in the FA Cup final against Aston Villa came directly after having switched wings with the Chilean. Let’s face it, a front three of Alexis, Giroud and Walcott swapping sides and roles is enough to give any defence a headache.

But will he still be at Arsenal come August?

This is the million dollar question – there is still a possibility that by the time West Ham roll up at the Emirates on the opening day of the Premier League season, Theo could no longer be an Arsenal player. His contract is now less than a year from expiry and for all the noise at the end of May around signing on, there is a rather strange silence on that front at present.

Let’s hope that Arsene and Theo can come to some sort of mutual agreement in the coming weeks, as whether he plays up front or on the wing, Walcott is a big-game player with the calibre and potential to take this Arsenal team to the next level.

What lies at the heart of the European Super League

The new Champions League format and what it means for Arsenal

Allardyce quotes on Maitland-Niles could be trouble for Arsenal