Somebody has ranked all Premier League managers and Sir Alex Ferguson beats Arsène Wenger by quite some distance.

I don’t think the ‘study’ takes into account how many star players have forced their way out of the club or the impact of building a stadium, general budget on players fees and wages but it does still rank Wenger second.

The Frenchman’s record of 1.99 points per game, which is bettered by four managers.

Ferguson and Wenger benefit from their longevity – they don’t have the best records but they have both achieved over such long periods, which is taken into account. 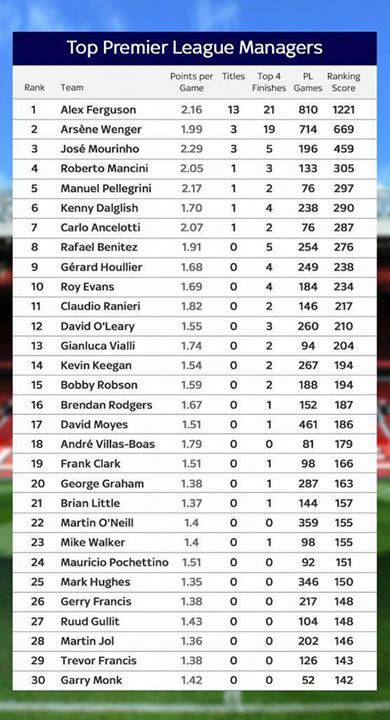 The regularity with which Arsenal have achieved Champions League football is remarkable, even more so when you consider the financial restraints and the challenge of wealthier clubs over the last few years.

Wenger has managed to guide Arsenal into the top four on an amazing 19 occasions – every single year he has been in charge.

It’s hard to argue with the ranking of Sir Alex Ferguson but – as I said – Arsène Wenger’s achievements are totally appreciate by the table, which appeared on allsoccerplanet.com. I have no idea how the ranking score was calculated, but a way to represent the constraints each manager was under would work wonders to it.