To buy or not to buy – that is the question.

Even following the January acquisition of Gabriel, there is still some clamour for Arsene Wenger to purchase another defender to supplement his squad. Yet when you look closer at our squad in comparison to our rivals, it’s hard to see where that defender would fit.

Earlier this weekend I wrote about how the boss has moved away from signing centre backs with the capacity to play full backs, and instead now targets specialist full backs with the qualities and potential to move inside as required. On further inspection, the trend is even more marked.

It’s often perceived as the holy grail for football managers (trophies aside of course!) and at the start of each season it’s what each head coach is desperately searching for, right up until the day when the silverware is handed out.

Arsene Wenger can often be heard eulogising about the importance of balance, and usually that’s in reference to the minimum number of defensive players he can get away with to maximise the number of tiny midfielders he can fit into his team without detriment to results.

However, balance is also important in terms of the makeup of the squad, rather than just the team that takes to the field. Having the right mix of experience and youth, of complimentary but different options (the famed Plan B) and even of characters can make the difference between a successful and unsuccessful campaign.

And then of course there is the balance around the number of players – enough to cover you in the event of injury and suspension but few enough that it’s possible to keep the dissatisfaction under control. And that’s where versatility comes in.

The current Arsenal squad is incredibly versatile – of the eight senior defenders, just half are specialists in one position only (Bellerin, Gibbs, Koscielny and Mertesacker). Monreal, Debuchy, Chambers and Gabriel are all capable of playing wide or centrally, which allows Arsene to manage his squad’s risk to injury and suspension with a smaller number of players.

Debuchy’s various injuries did not disrupt the team like in previous years because of the level of cover available, and the January addition of Gabriel has significantly strengthened the one area of the defence where Arsenal were particularly vulnerable. Koscielny’s absence was keenly felt in the first half of the season in a way that the improved balance addresses. Positive signs. 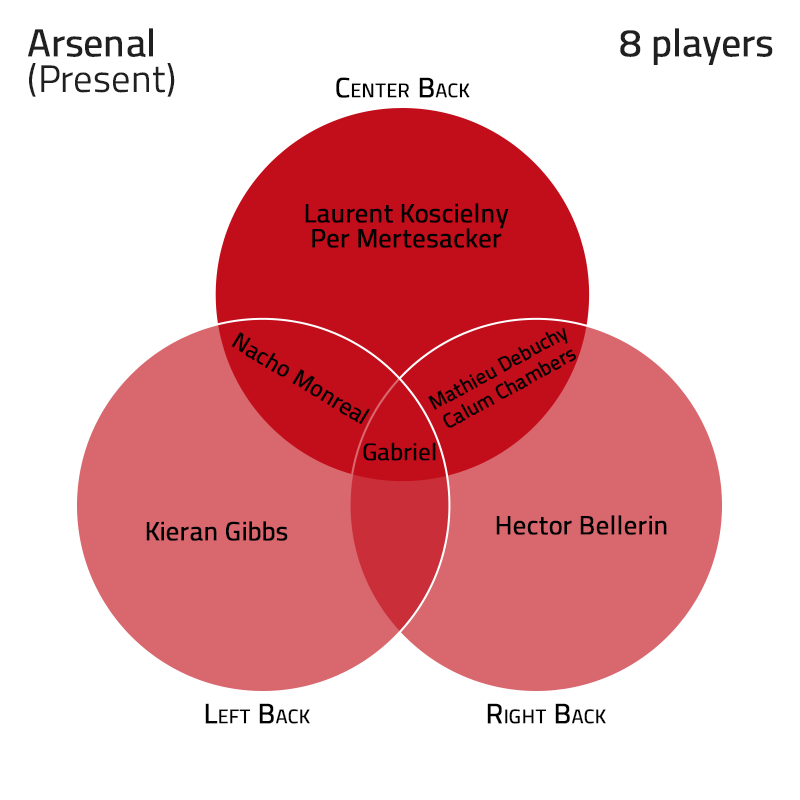 Compare and contrast with one of Arsene’s earlier sides – the Invincibles. There were seven senior defenders on the books (no, a teenage Justin Hoyte does not count) and not a single one of them could play anything other than their specialist position.

Martin Keown’s absence following the Battle of Old Trafford was easy enough to cover, with three other centre backs available. However, Lauren’s four game ban saw Kolo Toure switched to an uncomfortable right back slot ahead of the aforementioned Hoyte. 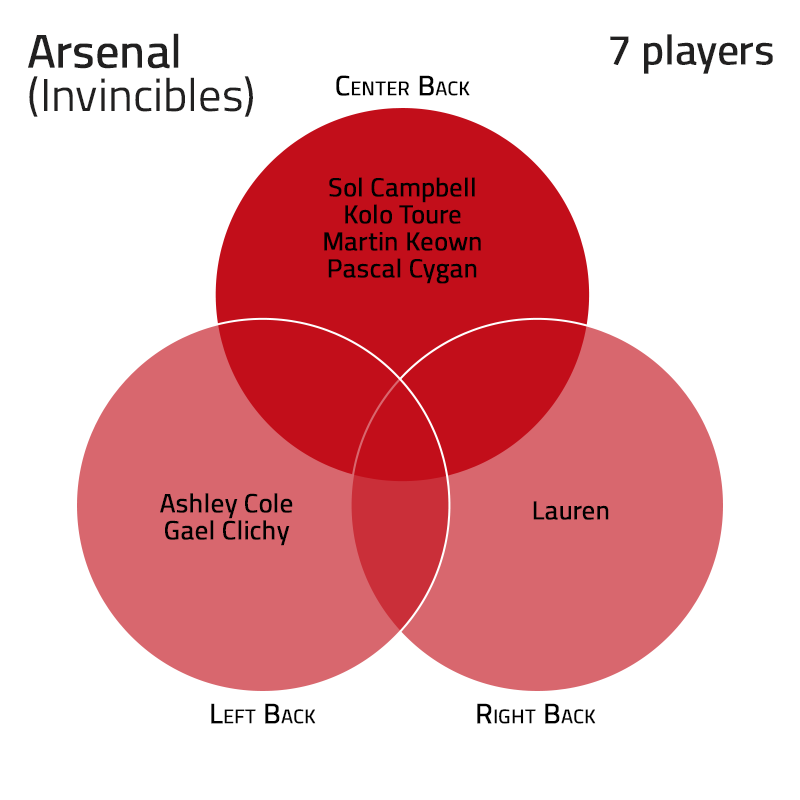 And so to the modern day pretenders – Jose Mourinho’s Chelsea. It has been clear throughout the season that Chelsea have had some good fortune, but a closer look at their squad demonstrates just how wrong it could have gone for the men from the Bridge.

They went through the season with just six defenders, and four of them specialists in a single position. Filipe Luis started just nine league games all season and Kurt Zouma just six – a back four of Azpilicueta, Terry, Cahill and Ivanovic was expected to play almost every game.

Injury league demonstrates this, showing that Terry and Cahill were available for every single minute of this season, while Ivanovic and Azpilicueta were unavailable just 2% of the time.

In contrast, Arsenal’s (arguable) first choice back four of Monreal (14%), Koscielny (19%), Mertesacker (0%) and Debuchy (62%) missed much more sizeable chunks of the season. 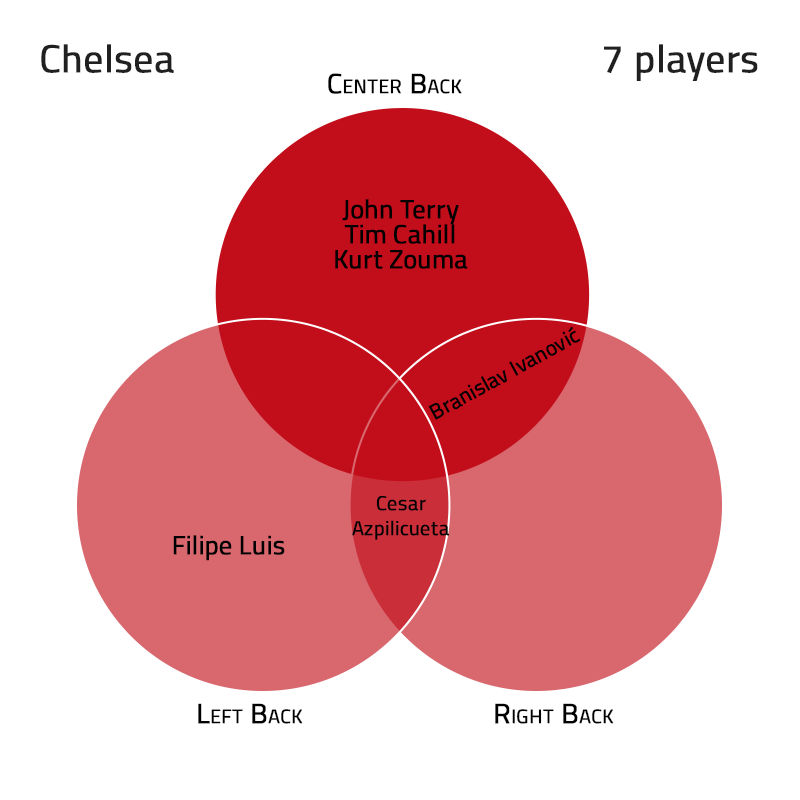 Interestingly, Manchester City also have a smaller and less flexible squad than Arsenal, with Bacary Sagna the only player out of seven who can play multiple positions with any kind of credibility. It’s curious that Chelsea and City, with their seemingly limitless spending budgets, have chosen to keep numbers small at the back and thus increase their vulnerability to mishaps.

And City are perhaps the best example of what could have happened to Chelsea – Vincent Kompany missed 31% of the season, handing 24 starts to the useless Mangala and 28 starts to the inconsistent Demichelis – one solitary injury which caused them no end of trouble. 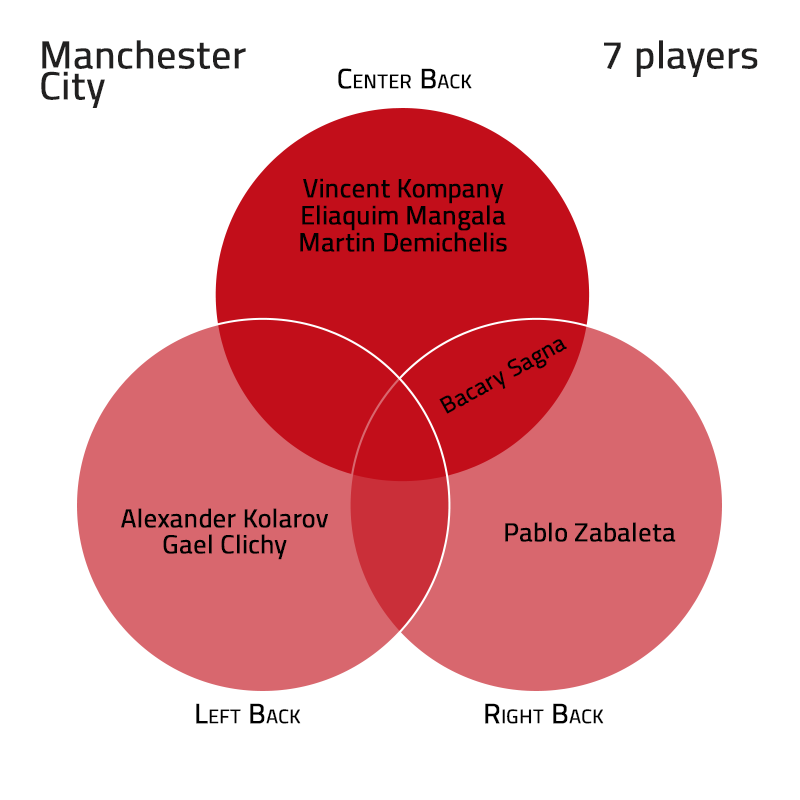 Manchester United’s summer spending allied with a defensive crisis at the start of the 14/15 season saw them put together a senior squad of a whopping ten defenders – the most of any of the top five clubs by a distance.

However, they were notoriously weak at the back, in no small part to the balance of those defenders. While Jones, Smalling, Blackett and Rojo could ostensibly play centre back or full back, all four are primarily central players who can “do a job” out wide.

As Arsene found in his early days tinkering with the balance of his defence, expecting your centre backs to adapt to playing full back doesn’t work half as well as moving your full backs inside when required.

It meant that van Gaal ended up playing Phil Jones and Chris Smalling at right back during injury problems for Rafael which saw him miss 43% of the season and Antonio Valencia’s various injury and form issues. And it meant that Daley Blind was excessively used at left back in place of Luke Shaw (50% missed) and therefore unavailable to play a role further forward. 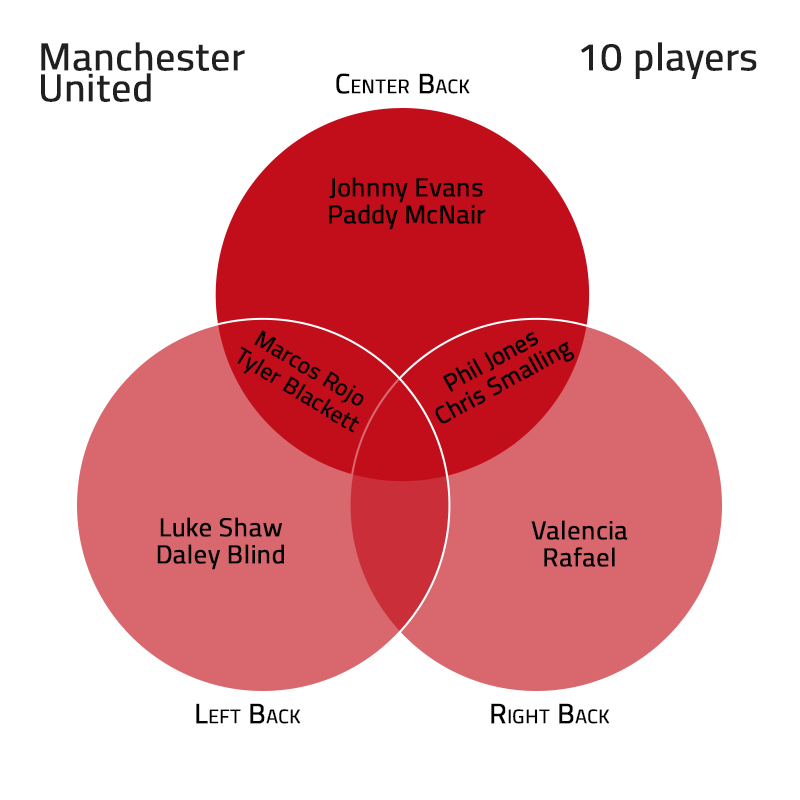 And so to our nearest and dearest. The signing of Kieran Trippier this summer moves Spurs to nine first team defenders (at least until they inevitably sell someone) but in doing so they have addressed the symptom of their problem not the cause.

Just like United, Tottenham’s versatility options last season were primarily centre backs (in the shape of Vertonghen, Kaboul, Dier and Chiriches) who could fill in at full back, rather than the reverse. All their decent full back options were pure specialists with no ability to play inside.

This meant that for the 60% of the season which Kyle Walker missed, Pochettino had no choice but to play a centre back on the right – there’s a reason Spurs fans think Chiriches is rubbish (he is) but it’s hard not to have a little sympathy for the Romanian when he has been consistently played out of position. Just ask Johan Djourou. 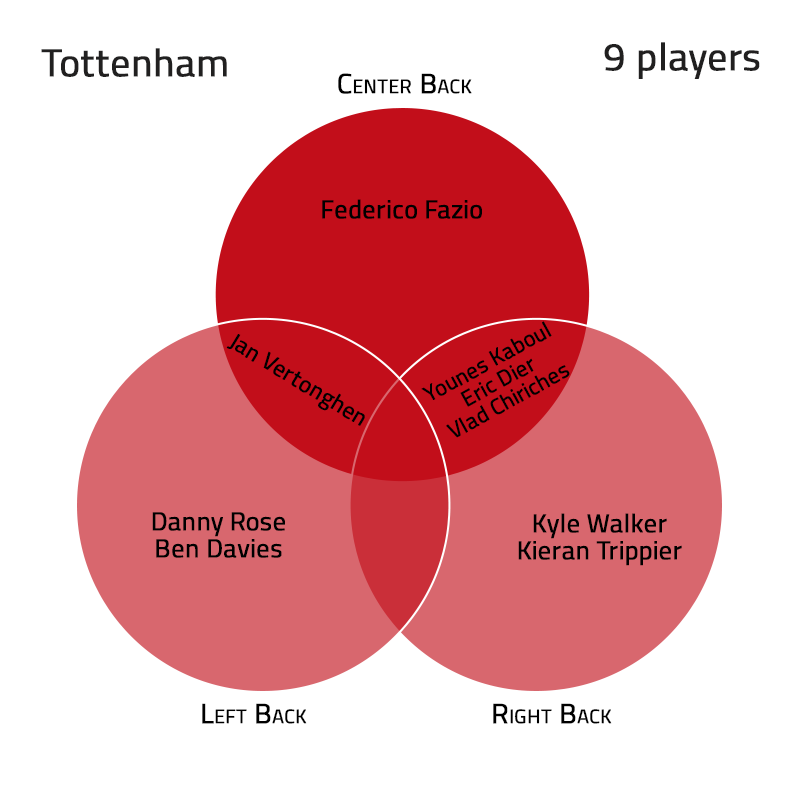 So it’s easy to look at the current Arsenal squad and say we need more bodies, more numbers, to cover the inevitable defensive crisis that will hit us around November, but based on the evidence it’s simply not true. We have at least three players who can play every position across the back four, but we have kept the squad to a manageable size in doing so, making it easier to keep everyone happy.

The real question is whether we can find someone who is better than our current option – and available – to replace one of those players. With four of our six centre back options over 30 by the end of the season, the question is whether this positional balance is matched by a balance between youth and experience.

To buy or not to buy – that is, indeed, the question.

Episode 291: Arsenal’s questions for the summer

Will Arteta turn things around at Arsenal next season?

Lukas Podolski hits out at player’s wives with sexist comments

Stan Kroenke will reject any 2nd bid from Daniel Ek