After struggling to get a place in our starting 11 for years, goalkeeper Lukasz Fabianski decided it was time to call it a day and last summer he moved to Swansea City.

After spending seven years at the club, it’s understandable that he made a few friends while playing for the Gunners and one of them, midfielder Jack Wilshere, was intent on praising the Polish international’s performance on Monday night.

He added, “When he was at Arsenal you could always tell that he was going to be special. I played with him for two years and sometimes with him it was maybe a little bit mental but it seems like he’s sorted that out and he’s a top-class goalkeeper. Luckily for them he was on form tonight.”

Although it’s nice to see players praising ex-players where warranted, it would’ve been preferable that the ‘keeper didn’t have such a solid game on his return to the Emirates. However, the majority of that is probably down to wanting to impress his ex-manager and to show why he’s worthy of first team football.

Meanwhile, as the other end, David Ospina let in one of the strangest goals we’ve had scored against us this season. From one of Swansea’s only attacks in the second half, the Colombian thought he’d hooked the soft header from Bafetimbi Gomis out before it’d crossed the line. However, thanks for goal line technology, we knew it was in fact a goal. 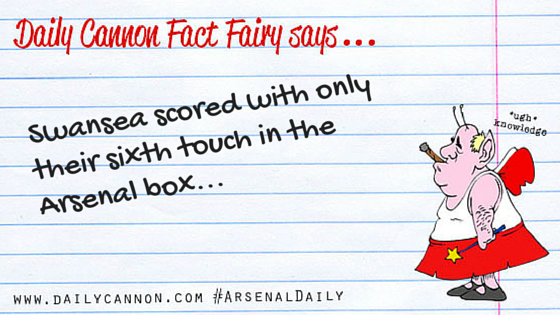 Folarin Balogun let’s his football do the talking

Mat Ryan speaks emotionally about his transfer to Arsenal