Aston Villa fans have been banned from taking a banner to the cup final because it contains the word ‘Arsenal.’

Coming up with a quite creative banner for the showpiece final on Saturday, the FA requires that all banners be submitted prior to the final for approval and they have told the Villans that they will not be allowed to display it. 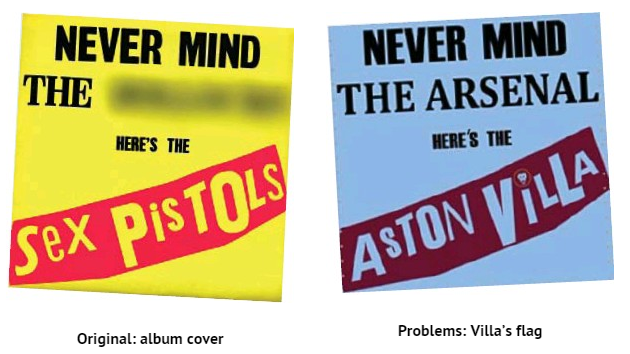 It cost the group of fans £3,000 to produce and will, perhaps, now be seen by more than it would have been at the final because of the FA’s ridiculous decision.

The FA said: ‘The FA and competing clubs agreed the criteria by which supporters could be allowed to bring display flags into the stadium.

‘It was communicated through the usual channels that supporters are required to submit requests to Wembley and must supply a visual for approval prior to consent.’

The fan group responsible, My Old Man, have started an online petition regarding the ban and issued a statement saying “While there’s a slight edge of humour there, it’s not disrespectful in the slightest to Arsenal fans.”

And we have to agree.

Here at Cannon Towers we can’t see what all the fuss is about at all and would like to offer the Villa fans our support in getting the banner into Wembley.

At a time when the fans matter less and less to the FA, things like this are just another step towards sterilising the atmosphere at what is supposed to be the biggest domestic game of the season.

Already the fans of each side are outnumbered by people with no association to either, what’s next? The banning of colours and songs?

If you’d like to support the Villa fans, you can add your name to their online petition here.