FIFA have disclosed on their instagram page the first FIFA WWC 2015 sticker.

Following a twitter vote England’s Jill Scott was chosen ahead of Marta of Brazil, Homare Sawa of Japan and Christie Rampone of USA.

And here it is: 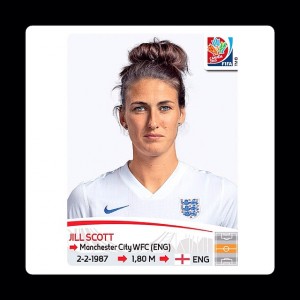 As usual, we will not get 23 players’ stickers for each team, this is the same situation as for the men’s album.

The reason is the final 23 players squad list for the tournament is not known when they started taking pictures for the album.

In the past, some players chosen for the Panini album ended up not being selected for the World Cup squad.

The album will be sold in Canada of course, in the USA and in countries with big women’s football market like Germany, France, Spain and England.

You can see the England’s 2011 album’s page below, they had image rights problem for iconic players like Alex Scott or Kelly Smith and they did not feature. 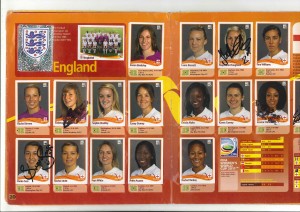 The competition will be played from 6th June to 5th July 2015 in Canada.

England are placed in Group F alongside France, Colombia and Mexico.

Player ratings: How do they work?