Arsenal’s have dropped from eight to ninth place in the UEFA coefficient rankings.

Porto moved above them but the Gunners remain above Manchester United, but only by seven points.

The rankings are worked out based on results in European competitions and Arsenal did themselves absolutely no favours by being complete morons against Monaco.

United, as we know, did not compete in any European competition this season.

Based on results over the last five seasons, Liverpool rank in 40th place while Tottenham sit some 20 places above the ‘five times’ Reds. 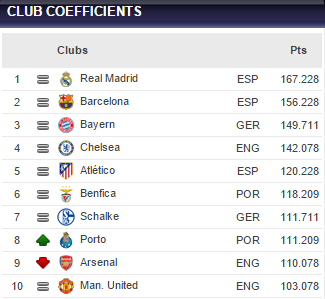 Since 2009/10 clubs have been awarded an additional point if they reach the round of 16, quarter-finals, semi-finals or final.

NB Points are not awarded for elimination in the third qualifying round or play-offs, since those clubs move to the UEFA Europa League and are awarded points for participation in that competition.

Since 2009/10, clubs have been guaranteed a minimum of two points if they reach the group stage and are awarded an additional point if they get to the quarter-finals, semi-finals or final.

*Penalty shoot-outs do not affect the calculation system.

Coefficient calculation
Clubs’ coefficients are determined by the sum of all points won in the previous five years, plus 20% of the association coefficient over the same period (33% before 2009).

These rankings will be updated after each round of UEFA club competition matches.