There, I said it.

I loved his face, his football, and his feistiness in the face of adversity. Most of all, I loved that he flew in the face of the idea that you had to spend the earth to conquer the footballing world.

The Arsenal fanbase have been divided (yet again) this week, this time over whether Fabregas’s banner should fly over the Ken Friar and Danny Fiszman bridges. Over at Cannon Towers, we had quite the debate over whether it should be removed or not. 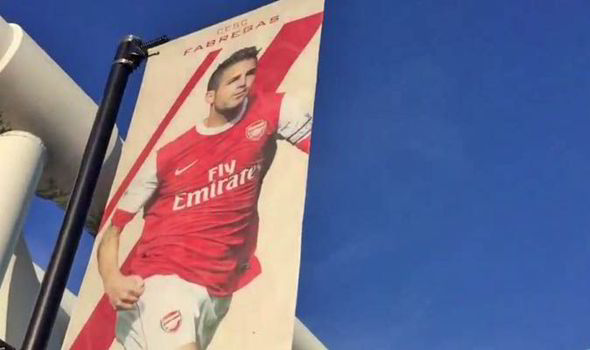 On one thing we were agreed – a player turning out for a city rival should not adorn the passageway to our ground.

How can you be a club legend while kissing the badge of another shirt? In short, you can’t.

Where it becomes less clear-cut is whether the banner should even have been erected in the first place.

The sentiment is clear – the banners are supposed to represent our history, to remind fans and players alike every time they visit of the legends of our club who they dream of being or hope to emulate. The trouble comes when the history is not a closed chapter.

Any player who leaves the Emirates, for whatever reason and to whatever destination, has at some point a chance of playing for a rival club. By placing banners of those still active, the club activated a minefield.

Over time, most players are judged based on what they contributed to the team and to the club overall, but the crucial part here is that is happens over time. In the shorter term, the behaviour of the player both during and immediately after his career with the club colours the most recent memories and affects how they are perceived.

Patrick Vieira, in spite of captaining Arsenal through some of our greatest successes, still carries the stigma in some circles of having chosen to take the next steps of his career with Manchester City, rather than our beloved Arsenal.

Never mind a player who is spending his peak years playing directly across London for that most despicable of teams, and the most obnoxious of managers.

To achieve true legend status, in my mind, you have to assess a footballer’s playing career as a whole once it has reached its conclusion and not before. That’s where Arsenal went wrong – by including Fabregas in a list of illustrious names such as Bergkamp, Wright and Brady. After all, who’d have thought Arsenal fans could start to forgive Ashley Cole his rather more direct defection to Chelsea while the man is still playing, if ever?

When the dust has settled, that will be the time to decide if Fabregas makes the cut.

When is a legend not a legend?

It’s easy to forget how important he was to us, how long he was with us and how long he carried the team during a period of difficulty and uncertainty. To those who talk of how his seasons always tailed off, is it any real surprise when he was expected to lift Arsenal sides onto a different plane during our austerity period?

It’s easy to hate him for leaving rather than love him for coming in the first place. Even if we didn’t agree with the timing or nature of his departure, we all understood it, and that’s what made it hurt so much at the time.

It’s easy to be revisionist when the landscape changes and suddenly he’s pulling on a different shirt across the capital.

To me, even though there is more than a touch of ‘might have been’ when I think about Fabregas, he was pivotal through some of our darkest years (dark years indeed, when we could only secure 4th place). I am in little doubt that in ten, fifteen years time, when we look back on his time with us then we will recognise him as one of the legends of our club.

But in football, as in life, timing is everything.

Keep the legend status, and the banners, for those who have retired.

At that point, they might even start to appreciate it.