Ahead of our quarter final tie against Manchester United, we run the rule over our corresponding 2014 victory over Everton. 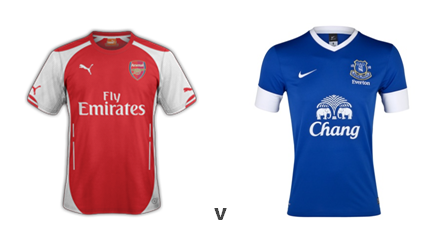 As Everton rocked up at the Emirates for Arsenal’s fourth home tie in a row, it was the first game of a massive week for the Gunners. There was a temptation to cast half an eye on two huge games coming up later in the week in the shape of Bayern Munich in the Champions League and top four rivals Tottenham in the Premier League.

Everton were having a decent season too, involved in the battle for Champions League football, and boasted a decent record against Arsenal which included quite a number of draws in recent encounters. With fixture congestion already a problem, the Gunners could hardly afford a replay and another game on their schedule.

Sanogo and Fabianski were once again restored to the starting line-up to reprise their roles as cup specialists, and elsewhere injuries to Wilshere and Koscielny helped ensure that Wenger again made a drastic number of changes to his eleven, bringing in the Ox, Ozil, Flamini and Vermaelen.

However, both sides were fielding strong teams, and the intention was quite clear from the very start – neither side wanted a replay, and both sides were going to play to win. It made for a memorable cup tie with a trip to Wembley as its prize.

Everton started the brighter of the two sides and had the early pressure, but Arsenal had been starting brightly in all their cup ties in the 2014 run, and this was to prove no different. With first half goals in all three rounds before, the Gunners went even better to score after just seven minutes.

Santi Cazorla and Mesut Ozil are rumoured to be unable to play together, but the pair made a mockery of that when the Spaniard’s inch perfect pass round his German colleague and he was able to power a shot beyond the Everton keeper with barely an adjustment of his body position required.

There was to be no sitting back on the lead – Arsenal poured forward in search of a second and breathing space, with keeper Robles making good saves from Sanogo and Vermaelen and the keeper also turning a cross onto his own bar in a panic. Gibbs and Arteta also had efforts blocked as the home side turned the screw.

It was end to end stuff when Everton did manage to get out, with Arsenal’s attacking approach inevitably leaving the odd hole at the back – Pienaar in particular was guilty of screwing a shot wide when well placed. Unlike the opponents in the previous three rounds though, Everton were able to find a way back into the game before the Gunners could extend their lead and make it a more difficult afternoon in North London.

When it game, the goal had a touch of fortune about it – Barkley did well to drive forward and cross for Mirallas. The Belgian scuffed his shot for just four yards out, but fortunately (or unfortunately for Arsenal!) the ball feel to his international team-mate Lukaku who could barely miss from just a yard out.

Both teams huffed and puffed their way to half time for refueling and instructions from their respective managers. It was the very definition of a game which could go either way.

Arsenal came out as if they were being chased by wild horses, and although Vermaelen again forced a save from Robles and Cazorla had a shot tipped around the post, Wenger soon decided to send for the cavalry. Sanogo had played well and given the Everton defence something to think about, but the experience of Giroud was called upon to close the tie out without need for a return trip to Goodison.

Alex Oxlade-Chamberlain was another who had played well, and the young Englishman brought the breakthrough that changed the pace of the game with 20 minutes to go. A fantastic lung-bursting run was abruptly brought to an end in the box by a clumsy challenge from Gareth Barry.

Mikel Arteta stepped up and dispatched the penalty to Robles’ right, only to be ordered to retake it by Mark Clattenburg. The nervousness in the ground as the Spaniard addressed the ball for a second time was palpable, but we need not have worried. Our captain cooly placed the ball high to Robles’ left and relaxed the Gunners.

From then on, it was pretty much all Arsenal, with some scintillating football in the last quarter of the game. Giroud gave the home side some breathing room when he slotted Sagna’s cross home from close range, and then doubled his personal tally just three minutes later with a cracking goal.

Cazorla starts the move off and then some sublime one touch play cuts the Everton defence apart, with each touch taking another Everton defender out of the game. First Rosicky plays it on to Ozil clean through but relatively wide and with a defender closing. And of course, being Ozil he makes the right choice, squaring it first time for Giroud to apply a simple, first time, finishing touch past a despairing Robles and cement Arsenal’s place in the semi-final.

“Que sera sera”, sang the crowd. Arsenal were on their way to Wembley for the first time in a long time.

It was time to start preparing the yellow ribbons.

Everton had a handful of chances, and in the first half could have made it a real humdinger of a cup tie. In the end though, Arsenal’s cutting edge and clinical finish meant the scoreline had a gloss which was perhaps slightly harsh on the visitors.

With an away trip to United this weekend, Arsenal won’t care a jot if there’s no gloss whatsoever to the result, as long as they are in the draw for the semi-final.

Our last trip to Old Trafford for a cup tie ended in less than satisfactory circumstances despite facing a United side packed with defenders. A more mature performance will be required to keep the 9,000 travelling support happy, and their millions of counterparts watching on the television.

Once again though, Arsenal find themselves just one game away from Wembley. It is too good an opportunity to miss. Time to put that United voodoo to bed.

What Stan Kroenke failed to understand about Arsenal fans