Francis Coquelin suffered a broken nose against Everton on Sunday.

The French midfielder smashed his face into Olivier Giroud’s head and, if that wasn’t enough to wonk his conk, he then took a ball to the face later on, that being the final straw.

As someone who has suffered a badly broken nose I can’t imagine the pain of taking a football, full-force, to the face minutes after it was initially broken.

Although the possibility of seeing Le Coq in a facemask and going all ‘Fifty shades’ against QPR, it is ‘just‘ QPR and Arsenal could take the chance to rest him ahead of the FA Cup quarter final against Manchester United on Monday.

That being said, there won’t be much healing done between then and now, although it would be advisable to make sure that it isn’t damaged any further.

Speaking after the game Wenger confirmed that Coquelin’s nose was broken, although I’m pretty sure the photographs did that for us as well: 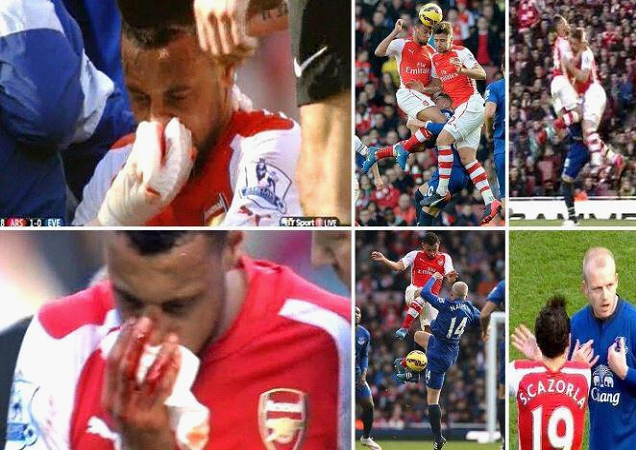 “I don’t know whether he will need surgery or not.

“He wanted to stay on. He didn’t play here for a long time so now that he plays, of course he doesn’t want to come off the pitch.”

My nose-break needed two ops to fix it and it wasn’t anywhere near as smushed as Coquelin’s but the good news is that surgery shouldn’t sideline Le Coq too long should he require it.

At least he’ll get a mask.