You will have seen the picture before.

Carl Jenkinson, Aaron Ramsey, Jack Wilshere, Kieran Gibbs, Alex Oxlade-Chamberlain. Behind them stood a proud Arsène Wenger. The last time Theo Walcott’s future was in the balance, Arsenal pulled out all the stops to tie down the rest of the British talent at the club.

On 19th December 2012, with Arsenal fifth in the Premier League – 15 points adrift of Manchester United after just 17 games – and Theo Walcott and his agent playing silly buggers, fans desperately needed good news. The quintet whose contract extensions were announced that day were 21 or under, bar Gibbs (23). Wilshere and Gibbs are true homegrown talents, and Jenkinson also a lifelong Gooner.

Five full internationals with over 350 first team appearances between them and their whole careers ahead of them.

A month later Walcott – the club’s top goalscorer in the 2012/13 campaign – extended his contract After a number of years with very few British players in the ranks, we had some fine young talent from these shores. Players who could identify with the club, and would remain loyal, unlike those who departed from Wenger’s previous side. Guys the fans could identify with.

The summer of 2013 saw the faces of those six Britons on the façade of Emirates Stadium, in the ‘audacious stunt’ to reveal the new away kit. 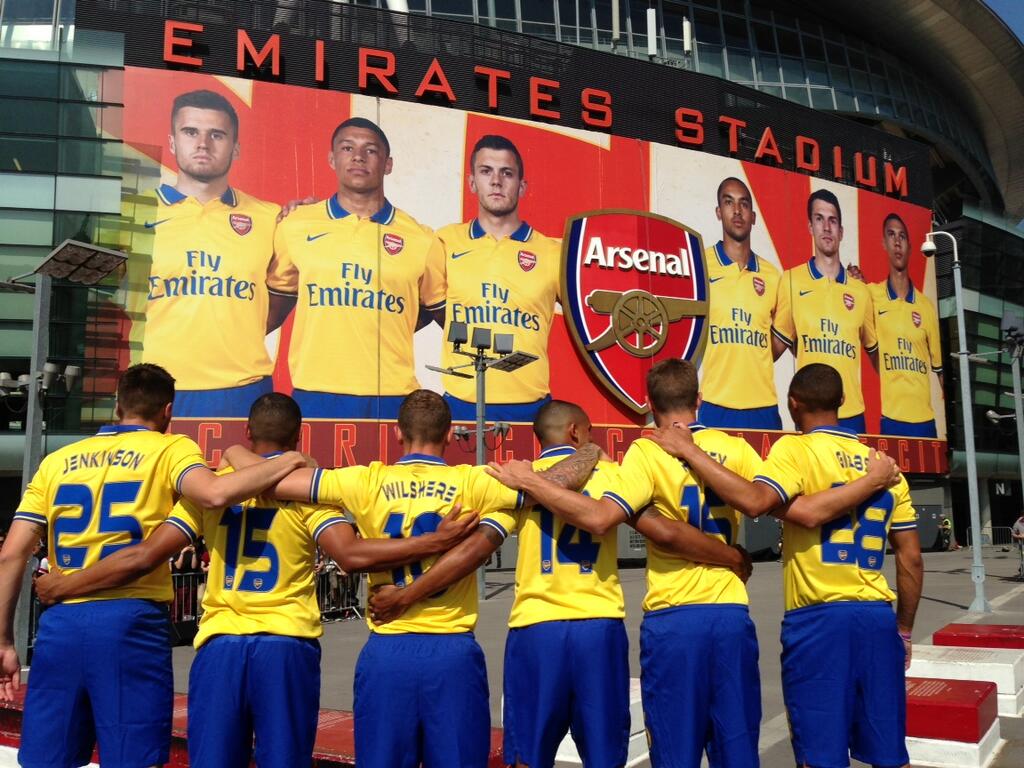 As well as being a marketing move, it seemed apparent that the club was proud to be building a team including such talent from no farther than England and Wales.

FA Cup Winners no, we see Mesut Özil and Alexis Sánchez line up for us each week, and we have only become stronger since December 2012 or, indeed, the summer of 2013. But as Arsenal have strengthened, the British core has been left a little bit by the wayside.

Just Chuba Akpom and Isaac Hayden have troubled the first team squad since then, with nine and two appearances respectively. Dan Crowley – nabbed from Aston Villa in 2013 – is the only English player not too far behind them. There doesn’t seem to be any sign that we are producing a new wave of homegrown talents to play alongside the aforementioned English (and Welsh) players.

As for those who signed on and seemed to represent a new generation, a new era, for the Arsenal team – their prospects seem pretty limited right now. In fact, when Paul wrote his article yesterday, he only included Alex Oxlade-Chamberlain when talking about who we could start with next August.

Let’s start with the negatives, and the subject of Oxlade-Chamberlain’s ‘bromance’, Jenkinson hasn’t had the Arsenal career he would have hoped. Always a fairly limited player anyway, but good to have in the squad, the signing of Mathieu Debuchy and the rise of Héctor Bellerín see Jenkinson way down the pecking order. He’s played plenty of games for West Ham this season during a loan spell which may well become permanent. If it doesn’t? His days at Arsenal are sadly numbered nonetheless.

It must be said that huge things were expected of Wilshere.

The new contract came not long after he’d returned from over a year out. Throughout his absence, and upon his return, Wilshere was billed as the figurehead of the Arsenal team. Someone we lacked when he was missing, and someone we looked to when he was available. Speaking on the day of the announcement, Wenger said “Jack is certainly the best known, the leader of this group.”

But he hasn’t yet kicked on.

Injuries don’t help at all, but Wilshere has played 51 games since the start of last season. Not as many as he would have liked, but not a paltry total. A further 36 games in 2012/13 campaign and you begin to wonder why he doesn’t even look the player people thought he was when he was just 18-years-old, let alone one who is beginning to fulfil his potential.

Injuries have been bad to Jack but he hasn’t exactly been totally bereft of first team football. 87 games in two and a half seasons have been broken up by injury, but the next year will be his biggest. As it stands, he won’t have the future that so many expected of him.

Walcott’s situation is fairly straightforward. He was a key player, signed a contract, got injured, returned, and is no longer a key player.

It wouldn’t shock anyone at this point if he leaves in the summer but – especially with the injury that saw him miss almost all of 2014 – it will always be a case, to me at least, of ‘what could have been’. With the number of adept players we have on the right flank, Walcott doesn’t stand out any longer. He isn’t worthy of a huge new contract.

Another player plagued by injury has been Gibbs.

A brilliant season last year which should have been capped by the winner at Wembley (never mind, Kieran), not many would have expected Nacho Monreal to emerge as the long-term winner of the battle for the left-back spot. Gibbs’ injury record has improved significantly over the last two years and was given the number three shirt in the summer, but Monreal just gets better and better. Not many could argue now that Gibbs – for the time being – is only Nacho’s understudy.

Again a player beset by injuries – he’s on the sidelines again now – ‘the Ox’ is a superb, yet inconsistent, talent. Still just 21, he can play to an incredibly high level in two positions. Never fazed by the opposition, he is something special and, if we look after his muscles better, has a huge future ahead of him.

Which leaves Ramsey. Do I even need to say anything?

The complete midfielder. Box-to-box, reads the game well, can tackle, has incredible timing offensively. Aaron Ramsey ticks every box. He is world class.

Jenkinson’s future at the club is so uncertain partly due to the signing of Calum Chambers. A more talented and versatile defender, Chambers looks set to have a long future at Arsenal, as well as for England.

Then there’s Danny Welbeck. Quick, strong, and with all the desire in the world. Walcott only has one of those attributes, and that’s why he may well be on his way out of Arsenal.

Two of the players originally intended for the British core have been replaced by more established, or more rounded, English players. The English player arguably most safe at Arsenal right now is the one developed by Manchester United.

Jenkinson is already on his way out, and there are already rumours about the futures of Walcott and Wilshere. Even if they do stay, they will struggle for a place in the first team each weekend. Ramsey – the only non-Englishman – is the lone player from this group guaranteed a place.

Growing up together at the club has certainly helped these players bond but they haven’t all developed as hoped and expected. It isn’t outlandish to suggest that, Ramsey and Oxlade-Chamberlain aside, none of the British stars will ever be more than squad players.

“Gibbs, Jenkinson, Oxlade-Chamberlain, Ramsey and Wilshere represent a core of the squad…I believe when you have a core of British players, it’s always easier to keep them together and that’s what we’ll try to achieve going forward.”

That was Arsène’s plan. Is it now? I’m not so sure.